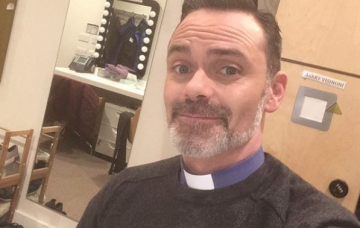 He plays Billy on the ITV soap

Coronation Street star Daniel Brocklebank has shared a picture of him on a day out with his co-stars Jack P. Shepherd and Mikey North and his adorable puppy, Colin.

In the shot, the three Corrie actors can be seen sitting on a bench in the outside area of a pub enjoying a few drinks.

Also in the image is Daniel’s dog Colin, who he adopted earlier this year.

Fans were excited to see them all together.

Another wrote: “Be careful of that guy sitting behind you ….” referring to Mikey who plays villain Gary Windass.

Others commented on how cute Colin looked. 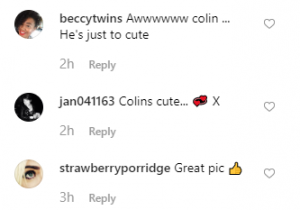 Daniel adopted Colin in March of this year.

The actor has taken Colin on plenty of days out, including to the set of Coronation Street to meet his co-stars.

Daniel’s alter ego is currently in a relationship with Paul Foreman.

Paul was first seen in May 2018 as David Platt’s cellmate in prison, but arrived on the cobbles in January 2019 looking for his twin sister Gemma.

David had been raped by Josh Tucker and went to prison himself for putting his sister’s then-boyfriend Gary in the hospital during a boxing match.

In prison when Paul gently tried to wake David, he lashed out at his cellmate and pinned him against a wall, but later apologised.

After Gary defended David in court, David was sentenced to community service which Billy attended.

When one of the guys made homophobic comments to Billy, David joined in. Billy confronted David who opened up about Josh raping him.

Billy and David tracked down Josh, and Billy warned another man who planned to meet Josh what he had done to David.

Josh was beaten up by the man and hospitalised. Feeling guilty, Billy allowed Josh to stay at his flat leaving David angry.

When Billy found out he had raped a man named Dec and possibly others, he threw Josh out.

David eventually got some form of closure when he bundled Josh into his car, convincing him he was taking him to the police station, when he wasn’t.

Seeing Josh in fear, he got closure and left him alone in an alleyway.