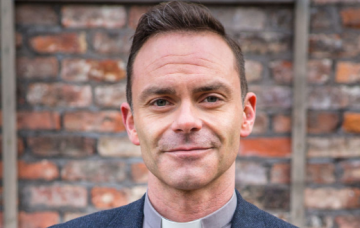 He is very cute!

Coronation Street’s Daniel Brocklebank has revealed he has a “new man” in his life.

I have a new man in my life. Peeps, please may I introduce you to Colin. ❤️❤️❤️
A huge thank you to @DogsTrust for all your help & guidance.
Adopt & give them their forever home. pic.twitter.com/x29DfDDZJU

The actor wrote: “I have a new man in my life. Peeps, please may I introduce you to Colin.

“A huge thank you to @DogsTrust for all your help and guidance.

“Adopt & give them their forever home.”

His followers, including celeb pals, were quick to comment on how cute Colin was.

Emmerdale actress Nicola Wheeler wrote: “Awwww look at that face….. and of course your new furry friend” with a dog emoji and series of red hearts.

Another user wrote: “Congrats he is a cutie.”

Up until January of this year Daniel was in a relationship with Stuart Hatton. The actor met the model at Stockholm pride in 2017 but the pair made a mutual decision to end their relationship after nearly two years together.

His Corrie alter-ego Billy unfortunately hasn’t had much luck with love.

After things ended with boyfriend Sean he began dating Todd Grimshaw. Todd ran away with their adopted daughter Summer after he feared she would be taken away by her grandmother. Todd then fled again alone after he assaulted a police officer.

Recently Billy had a brief fling with Gemma’s twin brother Paul, however he stood Billy up for another date.

His other storylines have included dealing with addiction after becoming hooked on painkillers, adopting his ex-boyfriend’s daughter and helping friend David Platt after he was raped by Josh Tucker.