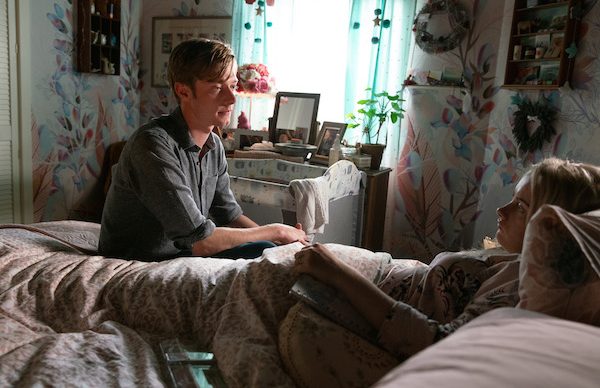 With only days left to live, Sinead is determined to make the most of what little time she has remaining with her friends and family.

But next week sees an unexpected drama come between her and Daniel when Bethany’s true feelings are revealed.

Tensions are high between Daniel and Sinead after Beth, Craig and Kirk throw a surprise early Christmas for Sinead, knowing she definitely won’t be around in December to celebrate.

But Daniel is overprotective and tells Sinead’s family that she is too ill to celebrate, leaving her fuming when she overhears.

As everyone tries to put on a brave face over their turkey dinner, the pressure of having a wife with terminal cancer is too much for Daniel and he eventually flees the flat.

But while Sinead reassures everyone that he will be back when he’s ready, Daniel is breaking down in the ginnel, struggling with everything that is going on at home.

Bethany is there to offer a shoulder to cry on, only for their friendly hug to turn into an embrace and soon Ken spots them together and orders Daniel home to his dying wife.

Bethany is mortified at what has happened and races home in tears, confessing to Audrey that she is in love with Daniel and blames herself for taking advantage of him in his most fragile state.

But while Bethany is struggling to get her head around what happened, Sinead is looking for a notebook at the flat and finds Bethany’s that has been accidentally left behind.

Flicking through, Sinead sees the story that Bethany wrote about her feelings for Daniel, and she is soon horrified when she realises her husband has got a secret admirer.

Daniel gets home and Sinead wastes no time in confessing she read Bethany’s short story and that it’s clear she is in love with him.

But Daniel is quick to play down what Bethany has written, desperately trying to keep with happened in the ginnel to himself.

Both Bethany and Daniel are in turmoil about their shared ‘moment’ and Daniel promises Sinead that it meant nothing, but she is so angry she can’t even look at him.

Craig is sickened about what happened and bundles Daniel out of the door, before going to see Bethany and telling his friend that he is disgusted with her behaviour.

But it is all too much for Daniel and he disappears once again, this time with Adam tracking him down in the ginnel alone, drunk and in self-destruct mode.

Sinead is heartbroken when she wakes the next morning to find Daniel hasn’t been home, but Tracy calls at the flat to talk, telling Sinead that Daniel loves her and Bertie with all his heart and that he would do anything for them.

With Tracy’s words sinking in, Sinead tells Daniel she wants to see him and the pair talk candidly about Sinead’s impending death, and Daniel promises to be a man that Sinead can trust to bring Bertie up in the right way.

With the pair back on track, they realise Sinead’s time is coming to an end and they prepare to say their final goodbyes.

Eventually Sinead passes away peacefully with Bertie and Daniel by her side, and Daniel silently cries, realising that he and Bertie are going to have to find a way to somehow live without Sinead in their lives.

What do you make of Daniel and Bethany’s ‘moment’? Leave us a comment on our Facebook page @EntertainmentDailyFix and let us know what you think!