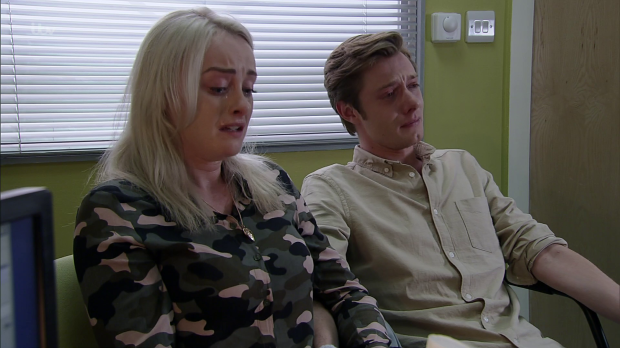 It's an incredibly powerful storyline

Coronation Street fans were gutted last night, when Sinead Osbourne was told the devastating news her cancer had returned – and given just months to live.

On Wednesday (September 11), viewers watched in horror as the new mum and husband Daniel discovered her original cervical cancer had spread to her lymph nodes and liver.

In scenes that surely must have affected even the coldest of hearts, Sinead learnt she had just three or four months to live.

Shocked to the core, the couple then had the horrifying task of sharing the news with their family.

As the tragic news sank in, Sinead started to blame herself for putting off chemo until their son Bertie was born.

But, of course, the newlyweds might not have had Bertie if she’d had treatment while pregnant.

Viewers were emotional at the storyline, with one tweeting: “Coronation Street is just dreadful tonight. I know it’s only a programme, but when I think people are going through this for real, it’s just heartbreaking.”

Another said: “So many tears watching Coronation Street. Poor Sinead. I know this is a soap but this is real life and this happens every day. I work in oncology and honestly your heart breaks seeing what people go through… Ladies please go for your smear tests.”

A third typed: “Bravo #Corrie, you have made the nation cry – heartbreaking episode. Truly awful thing for any family to go through.”

I’m crying like a baby, this entire storyline is beyond heartbreaking #corrie

I know it's just acting but those scenes have been played out for real for someone somewhere. Cancer is so brutally cruel 😢 #corrie

Dozens of others called the scenes “heartbreaking” and one admitted they were “in bits” watching from home.

“I’m crying like a baby,” admitted one more, while cancer survivors praised the ITV soap for highlighting the issue.

Writing on Digital Spy Forums, one wrote: “Sad, moving, but really acted so very well by everyone. Having had cancer myself and also my husband having had cancer, too, it really hits home.

“Well done to Corrie and well done to all actors involved. The line that said ‘it’s not the dying I am afraid of, it’s the leaving’ was just such an emotional line.”

Viewers know that Sinead was diagnosed with cancer last year just after discovering she was pregnant.

She decided not to have chemotherapy, instead turning to alternative medicines.

After Bertie was born, she underwent an intensive course of chemo and thought she was cancer free.

Were you moved by Sinead’s diagnosis? Leave us a comment on our Facebook page @EntertainmentDailyFix and let us know what you think!