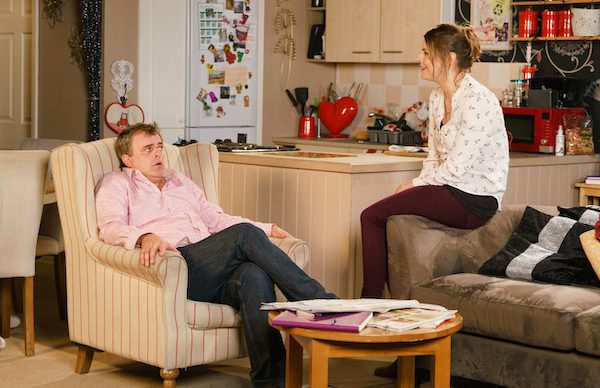 Is he Emma's dad?

Next week’s Coronation Street sees Steve McDonald stunned when he works out it’s possbile he could be Emma Brooker’s biological dad.

It has been widely reported that Coronation Street will be bringing back former cobbles favourite Fiona Middleton, played by actress Angela Griffin, in a huge new storyline that sees Emma discover the man who raised her wasn’t actually her biological father.

On screen this week soap fans will see Emma discover her dad is seriously ill in hospital… and by next week sadly things don’t look good for Emma’s poor dad.

When Emma goes to visit her dad at the hospital she is devastated when doctors break the devastating news that his cancer is terminal, leaving the hairdresser’s world shattered.

As Emma goes to see her father, she is upset as he drifts in and out of consciousness.

But as the pair spend time together, Emma is left stunned when her dad tells her he has always loved her as if she was his own daughter.

Emma is horrified by this shocking deathbed confession and grabs her phone to call her mum… and it seems this is a family secret that has just been waiting to get out.

Confiding in Audrey, Emma admits that her mum’s been lying to her for the last 20 years, and when her mum calls her back, Emma cancels the call, not wanting to talk.

However Audrey has seen the screen light up with Emma’s mum’s picture and is shocked to realise it is none other than Fiona Middleton!

Emma is devastated when she is told the man she’s spent her whole life believing is her dad has died, but as she struggles to come to terms with her loss, Audrey and Claudia do some maths and work out that Steve McDonald could be Emma’s biological dad!

Oblivious Emma makes it clear that she doesn’t want to search for her biological dad because she wants to respect the memory of the dad she is still grieving for.

But news travels fast in Weatherfield and it doesn’t take long for Steve to discover Emma is his ex Fiona’s daughter.

Emma tells Steve that her mum lives abroad but that she was originally from Weatherfield and is called Fiona, and the penny quickly drops for Steve.

When Steve sees Emma crying at a bus stop, he stops to help her and offers to take her to the chapel of rest to see her dad.

And despite the fact he is supposed to be collecting Tracy and Amy from the airport after their holiday, he spends time with the woman that could be his daughter.

Emma is upset that she can’t afford a nice coffin for her dad and Steve takes pity, slipping the undertaker £600… however he is soon left in the doghouse when Tracy works out there is money missing from their joint account and demands to know what he’s spent it on.

Not ready to feel the wrath of Tracy Barlow, Steve keeps his suspicions about having another daughter to himself and lies to her that he is going to help with the funeral of a family friend.

But really he is going to be a shoulder to cry on for Emma, and despite the fact she is completely oblivious to his theory he is her dad, she is grateful to have Steve’s support.

Determined to find out the truth, Steve starts to research DNA tests… but will his suspicions be confirmed?

How do you think Emma will react to the news Steve is her dad? Leave us a comment on our Facebook page @EntertainmentDailyFix and let us know what you think!