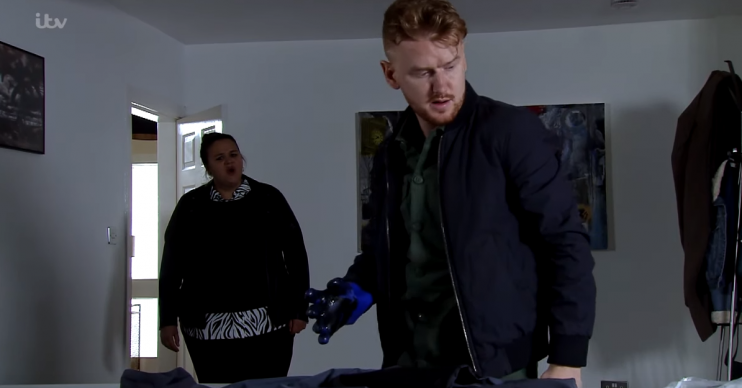 Gary killed Rick and brought down the factory roof

It looks like Gary Windass will be caught red-handed in tonight’s episode of Coronation Street.

After Gary confessed to Imran he was responsible for Rana’s death at the factory – but only by association as loan shark Rick Neelan did it to frame him – Gary is determined to make sure the police buy the story.

As he goes into the house, he finds one of Rick’s jackets and smears anti-vandal paint on it, but it’s not long before Gary hears Rick’s right-hand woman, Sharon, calling out for Rick thinking he’s returned.

As she walks into the kitchen, she explains she was collecting some of Kelly’s things for her but she soon realises Gary is smearing anti-vandal paint onto Rick’s jacket.

Sharon says: “What the hell are you doing? Anti-vandal paint, now why would you be covering Rick’s jacket in that?

“You wouldn’t be trying to stitch him up for something would you?

“You know like that factory collapsing? Yeah that’s right I’ve heard, cops have been trying to get hold of me.”

Gary then insists that he wasn’t trying to stitch Rick up because Rick did it but the police won’t believe him and think Gary did it.

But Sharon can see right through him. She says: “Thing is, they’re right aren’t they? You did or you wouldn’t be here trying to hang it on Rick.”

Gary is shocked when Sharon says she knows Rick wasn’t responsible for the factory collapse as she stayed at Rick’s the night the roof would’ve been sabotaged.

Sharon goes to call the police but Gary tries to wrestle the phone out of her hands and he yells: “They’re going to find out aren’t they?” and when Sharon asks what, Gary shouts back: “I killed him!”

What will happen now Sharon knows the truth? Will Gary kill her to cover his tracks and make sure the truth doesn’t get out?

Viewers know that Gary is responsible for the Underworld factory roof collapse that killed Rana Nazir. Gary also went on to kill Rick after the pair got into a fight in the woods.

Soon after killing Rick, the builder was shocked to see Rick had a teenage daughter named Kelly.

When she realised Gary had taken over her dad’s business she became suspicious of Gary when he told her Rick had gone abroad on the run from the police.

Kelly soon reported her dad as missing, knowing he wouldn’t leave her, so it’s surely only a matter of time before Gary is found out…