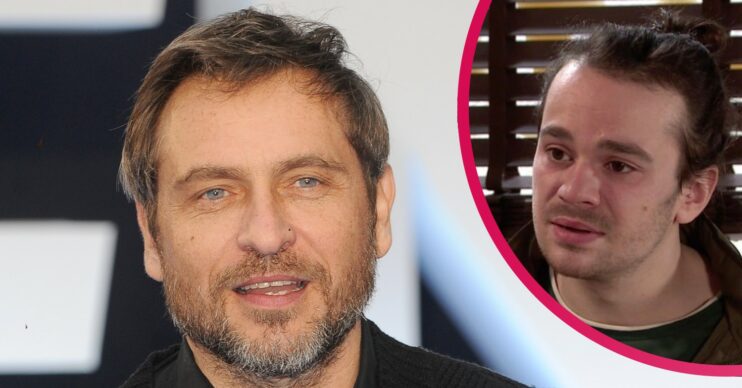 Coronation Street: Who is Abi’s ex, Tez? Where have you seen Seb’s dad before?

As Kevin Webster continues his desperate search for fiancée Abi Franklin, he heads to the Dog & Gun to track her down.

But instead of Abi, he finds Seb’s dad, Tez, who seemingly has no idea his son is dead.

So who is Tez? And who plays Seb’s dad?

Not much mention has been made of Tez before his appearance. Seb was brought up by Abi and his abusive stepdad, Darren, before he moved to Weatherfield.

When Kevin tracks him down, it’s to the Dog & Gun pub, notorious for its dodgy clientele. It was previously where evil Callum Logan based his drug operation and it seems that’s where Tez is now a regular too.

Although Tez assures Kevin he hasn’t seen or heard from Abi, Kev doesn’t believe him and heads back there later this week.

Kevin is set to catch Tez doing a drug deal and take a photo of him sampling the goods. The mechanic then threatens to send the picture to Tez’s probabtion officer if he doesn’t tell him all he knows.

Tez admits he saw Abi weeks ago, but didn’t speak to her. However it looks like he’s lying.

Will Tez tell Kevin the truth?

Who plays Tez in Coronation Street?

Actor Stephen Lord is playing the role of Tez.

Speaking of Stephen’s casting to Entertainment Daily! and other media at a recent press day, actress Sally Carman, who plays Abi, revealed: “He’s a wrong’un.

“The audience are left with no doubt that Abi doesn’t like him and has no time for him.

“But she simply knows he can help her with something that isn’t emotional.”

Why has Abi reconnected with Tez? What has she got up her sleeve?

What else has Stephen Lord been in?

Soap fans will best know Stephen for his stint in EastEnders as Jase Dyer. Jase was the father of Jay Mitchell who was beaten and stabbed to death in brutal scenes in 2008.

Stephen has also had roles in Casualty, Shameless and Marcella. The actor had a guest role across the pond in Hollywood hit series Once Upon A Time.

It’s not known how long Stephen is set to star on the cobbles for, but he’s sure to bring drama with him for his entire stint.