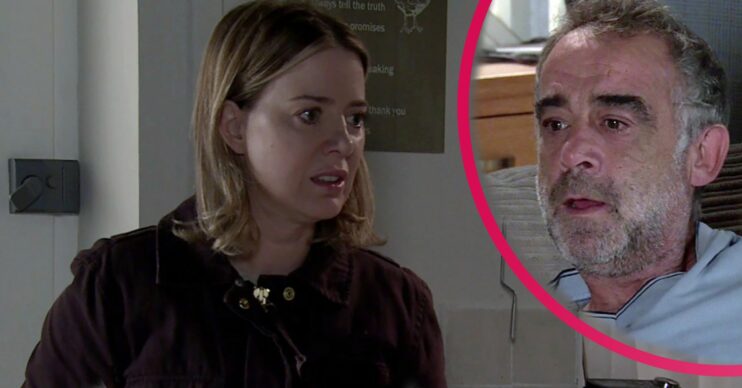 She’s not telling Kevin the truth

Coronation Street Spoilers for next week show Abi make a comeback, but what’s she hiding from delighted Kev?

It looks like Kevin and Jack’s prayers have been answered when Abi walks back into the house.

She’s full of apologies about putting them through hell after she went walkabout following Corey’s innocent verdict.

Read more: Who is in the cast of Coronation Street 2021? Meet the full line-up

Kevin is relieved when she tells him she hasn’t been using drugs and needed the £2k she took for food and lodgings instead.

However, Nina is soon worried about what Abi’s true intentions are.

Back at number 13, Kevin and Jack are doing everything to show Abi how much they missed her.

Jack is desperate to show her that they can have a happy future together and hopes Abi will never leave them again.

But Abi breaks both their hearts when she says that she can’t promise to stick around.

What does she mean by that, and has it got something to do with what she’s hiding?

She wants to know why Abi won’t put her wedding plans back on, especially when Kevin offers to arrange the whole thing himself.

There’s no good reason for Abi to object, so she eventually goes along with it – but Nina knows she’s faking.

Nina goes on a mission

A couple of days later, Roy finds a notebook at the café with details of Corey’s training regime recorded inside.

Nina’s already on edge, having heard that the brutal killer has got a life-changing chance to transfer to a German team.

She decides to track down the notebook owner and find out why they are interested in Corey’s movements.

Where will that mission lead her, and is Nina right to be worried about Abi?