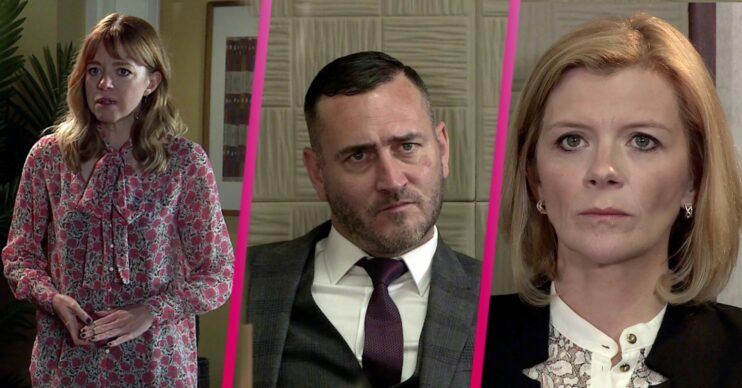 Toyah’s actions put her in his firing line

Coronation Street spoilers for next week show furious Harvey swearing revenge on Toyah and Leanne after his appeal is compromised.

He’s incensed when Toyah jeopardises his appeal after discovering Sabeen is blackmailing Imran.

Toyah isn’t thinking much about Harvey as she secretly brings about Sabeen’s blackmail plot by stealing Imran’s phone.

But she shoots right to the top of his hitlist when Sabeen reveals the appeal has been compromised and Toyah’s to blame.

Under pressure from Sabeen, Imran lies and steals this week – leading him to a crucial decision.

Disgusted by his efforts to get information from neighbours who trust him to help Harvey, Imran tells Toyah the truth.

She’s distraught when he admits that on the night Kelly was found guilty, he had a one night stand with a stranger.

Imran also tells Toyah that he’s been working incognito for Sabeen, who has been blackmailing him over what happened.

Toyah is ready to walk away, but in doing so, she’d compromise their next foster placement, which is about to be finalised.

After a chat with her ex-fiancé Peter, Toyah decides to keep up appearances but vows to dig deeper.

What does she have in mind?

What does Toyah do next?

Imran is relieved that she hasn’t left him, but Toyah’s not done with him yet.

She swipes his phone and finds a litany of messages between Imran and Sabeen that prove her blackmailing antics. Disgusted by them both, Toyah forwards all the damning evidence to Sabeen’s boss.

Little does she know that she’s just signed her own death warrant.

Sabeen is livid after being suspended for misconduct and tells Imran that she’s had all her cases taken off her.

She also warns him that Toyah’s made an enemy for life out of Harvey.

When she heads to the prison to relay the bad news to the dangerous gang boss, Harvey is incandescent with rage.

He’s even more incensed to learn that the woman who has jeopardised his appeal is Leanne’s sister.

Harvey swears that he’ll get his revenge on the Battersby sisters, but will he get the chance to make good on his promise?