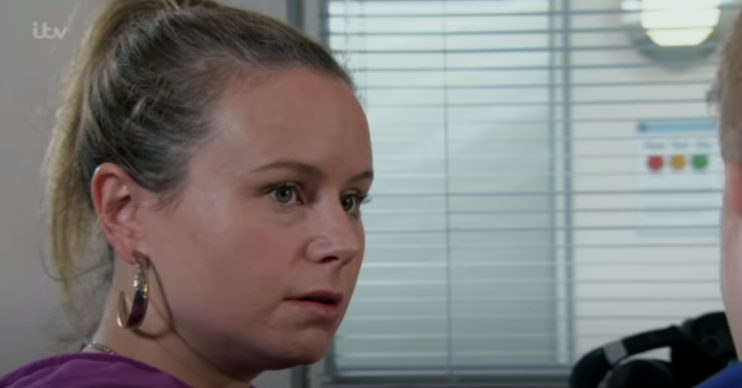 Gemma has been struggling with dark thoughts

Since the birth of her quadruplets, Gemma has been struggling with her mental health.

Over the past few months, Corrie viewers have seen Gemma’s dark thoughts continue to get worse, however she played off her feelings, thinking she didn’t need help.

In recent episodes, it was revealed she had thoughts of harming the children. Her thoughts included putting baby Aled in the washing machine and allowing the pram with the babies in to roll into the road in front of a bus.

But after witnessing Gemma leave the babies on a bus, Chesney realised his fiancée needed help.

In last night’s episode (Monday, April 13), Ches got Gemma to the medical centre to talk to Dr Gaddas.

What did Gemma tell Dr Gaddas?

In heartbreaking scenes, Gemma finally opened up about her feelings, explaining she couldn’t cope with the four children.

She also revealed she was unable to sleep because of the nightmares and had voices in her head, telling her she isn’t a good mum.

Although Gemma said she didn’t want to harm herself, she was honest and told Dr Gaddas and Ches about thoughts of harming the babies.

Explaining she never actually hurt her children, Gemma admitted: “Sometimes when I’m holding them, I just think about letting go.

“Letting them fall to the floor and dropping them. Or letting them slip underwater when they’re in the bath.

“Last week, I was by this main road with the buggy and I was looking down at my hands and I thought ‘If I let go now, then the buggy’ll just roll into the road, and the buggy’ll go under the wheels of the lorry and that’ll be it, that’ll be the end of it.”

Viewers praised Gemma for being so honest about her feelings and finally seeking help.

#Corrie is making me so emotional already. What a brave move, Gemma.

Poor Gemma, glad she is gonna get the help she needs #Corrie

Poor Gemma it must be horrible having PND #Corrie

Does Gemma have post-natal depression?

Dr Gaddas told Gemma she believes she has post-natal depression.

What a brave move, Gemma.

She also praised Gemma for her honesty, explaining she has taken the first step to recovery.

Now Gemma has opened up about her feelings, are things finally starting to look up?