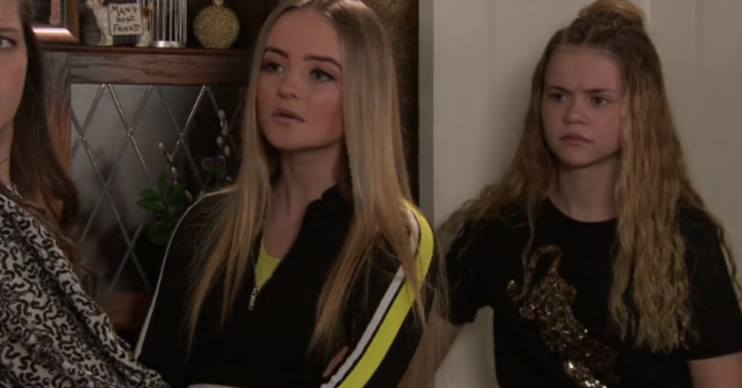 Kelly is the daughter of loan shark Rick Neelan

Coronation Street viewers have said they ‘despise’ new girl Kelly Neelan after she sent a naked video of friend Asha Alahan to their peers.

However, she began stirring trouble between Asha and her best friend Amy. Kelly kept making comments about how obvious it is that Amy fancies Asha’s ex-boyfriend and crush, Corey.

In last night’s episode of Corrie (Wednesday, April 15), before Amy’s party kicked off, Asha admitted to Amy and Summer that she had stripped for Corey on a video call.

However, Amy soon became distracted as the house filled with gatecrashers. As mean girl Pastal-Blue turned up, she immediately made Amy think Kelly invited all the unwanted guests.

In the hallway, as Corey looked at the video of Asha, Kelly went up the stairs behind him and saw what was on his phone.

Later, things kicked off between Amy and Kelly after a party guest ran past, causing Corey to knock Tracy’s lamp over.

But as Kelly went to catch it, it still fell and smashed. Blaming Kelly, Amy had a go saying she was sick of her causing trouble.

As Asha failed to stand up for her new friend, Kelly decided to get revenge.

Noticing Corey had left his phone in the house to go get some air, she went onto it and sent Asha’s video to the party group chat.

dislike kelly just as much as i disliked her dad 😠 #corrie

Kelly Neelan is a nasty cow! How horrible!!! #corrie

Wow. Kelly's turning out to be quite the troublemaker. #Corrie

By 'eck, that Kelly is a cow! If I were Dev, I'd march around to her dad's and have it out with him. Oh wait….😬#Corrie

But will Corey get the blame for Kelly’s actions?

Soon Asha returns to the party after stepping outside and realises people are staring at her.

But before she can figure out why, her dad Dev arrives and drags Asha, and an intoxicated Aadi, back home.

When she gets home, Asha checks her phone and realises what everyone has seen. Soon it hits her that the video is now viral.

In next week’s episodes, things only get worse for poor Asha.

Dev, who is oblivious to what’s happened, sends Asha and Aadi to Mary’s youth volunteering group.

But as they’re clearing up Victoria Gardens, Asha becomes aware of a group of lads staring at her.

It soon becomes clear the boys have seen the video. As Summer, Amy and Kelly try to comfort Asha, Aadi sees red and lashes out at one of the lads causing a fight to break out.

As a devastated Asha heads to the cafe, Corey finds her and apologises for recording her without consent.

Meanwhile, Amy and Kelly begin to fight over who is responsible for the video going viral.

David Platt sees the video on Max’s phone and is horrified to see it’s his 14-year-old neighbour.

Immediately he tells Dev, who confronts her daughter. But when Asha opens up about what happened, Dev realises how much she’s hurting.