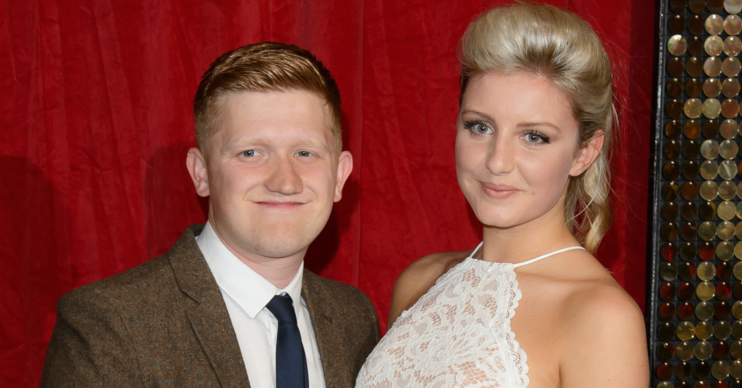 Their first baby is due in September

Briony, who is a yoga instructor, posted the black-and-white snap to her Instagram.

Her sweet caption read: “Thanks to you baby, I can’t remember the last time I felt lonely.”

Her followers commented on the post to tell Briony how amazing she looked.

One wrote: “Absolutely love that, you look amazing.”

A second commented: “Oh my days! You are truly beautiful.”

Sam and Briony announced that they’re having a baby last month.

They later revealed that they’re having a baby boy, who is due to arrive in September.

The couple explained they were shocked to find out they were having a little boy as there are lots of girls in both families.

Thanks to you baby, I can’t remember the last time I felt lonely.

Sam, who is one of nine siblings, said to OK!: “We’re having a boy. It was a massive surprise when we found out as there are loads of girls in our families, so we were adamant we were having a girl.”

Briony said: “We found out the day before lockdown. Sam couldn’t come with me because of the current rules, so I got the consultant to write it down on a piece of paper and put it in an envelope and we both sat in the car and opened it together. We were over the moon.”

While Sam is about to become a father for the first time, his Corrie alter ego Chesney Brown became a dad at 17 years old when his girlfriend at the time, Katy, gave birth to their son Joseph.

Last year, Chesney went from being a father of one to a father of five, when his fiancée Gemma gave birth to quadruplets.

In Sam and Briony’s OK! interview, they also admitted they would like to “fill their house with kids”.

However, Sam revealed he isn’t sure they’ll have as many kids as his parents did!
Leave us a comment on our Facebook page @EntertainmentDailyFix and let us know what you think!