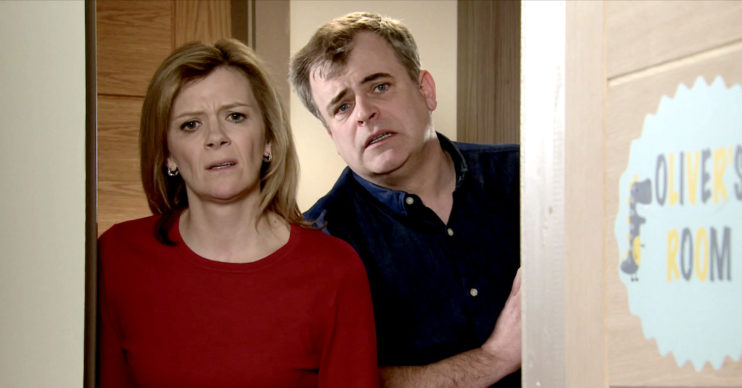 They are facing every parents worst nightmare

Coronation Street viewers were left in tears during last night’s episode (Monday, June 29) as Leanne and Steve were told their son Oliver has a form of incurable mitochondrial disease.

For weeks Oliver has been in and out of hospital having seizures. After the little boy had a series of tests done, Steve and Leanne finally got answers about what’s causing him to be so poorly.

At the hospital, the worried parents sat down with Dr Ward who confirmed the little boy has a form of mitochondrial disease.

She explained it’s like a “spelling mistake” in his DNA. It means the tiny batteries, the mitochondria, of Oliver’s cells are not converting the energy from food into energy his body can use.

Being honest with Steve and Leanne, Dr Ward said Oliver’s condition is life-limiting and it’s not reversible or curable.

Obviously, Leanne and Steve were heartbroken by the news. But Leanne wanted a second opinion, refusing to believe her son is that ill because she thinks he’s been improving.

After demanding a second opinion, Leanne stormed out of the consultant’s office. Leanne, Steve, Nick and Tracy went to see another specialist at the hospital.

She also confirmed Oliver’s health condition and explained the toddler will have good and bad days.

But despite a second opinion, Leanne still believes Oliver is getting better and said she wanted an opinion from another hospital.

As viewers at home watched the heart-wrenching scenes, they were left in tears.

I nearly cried for Leanne tonight. That's how powerful tonight's episode was. I never cry for anything. Wow I am blown away by tonight's episode. Well done to all at @itvcorrie . Tackling a disease that soaps would not naturally cover. That is the power of soap #Corrie

@RealJaneDanson potrayed Leanne to perfection tonight. I was nearly crying for her. I never cry for anything that's how powerful that was #Corrie

What’s next for Oliver, Steve and Leanne?

Next week, Oliver spends the night at his dad’s but at the crack of dawn, Leanne heads to Steve’s house in her pyjamas.

Worried, Nick follows and steers her home. Dr Gaddas says Leanne should consider counselling or meditation. But Leanne is furious and refuses.

When Toyah calls round to offer her support, Leanne turns on her sister insisting she has no idea how she’s feeling.

Imran and Nick urge Leanne not to take her grief out on Toyah, who is also devastated by her nephew’s illness.

Nick suggests they go to a support group for parents of terminally ill children.

Wanting to help, Toyah asks her friend Josie to come and see Leanne. She explains that Josie runs the support group for parents will terminally ill children.

As Josie tells Leanne her own story, Leanne takes comfort from her experience.