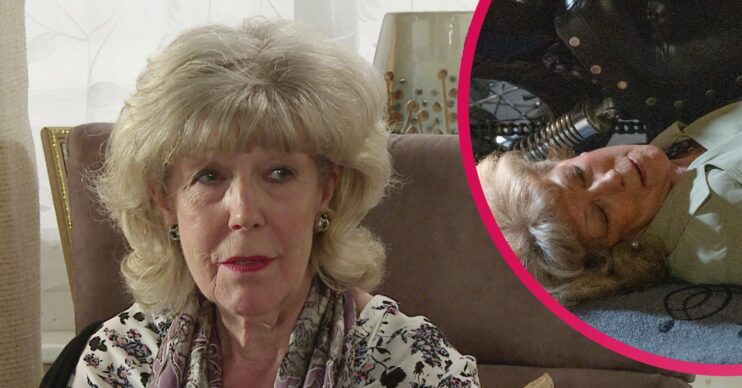 Will Audrey be okay?

Coronation Street spoilers for tonight (Wednesday, June 22 2022) reveal Audrey has a bad accident in the barber’s.

Rita finds Audrey in the Rovers enjoying her first drink of the day.

Rita points out to Audrey that she does still own the barbers and suggests she goes back to work.

When Audrey turns up at the barbers, she announces she’s returning to work before cracking open the wine and flirting with Ryan, leaving David annoyed.

When David tells her it’s time for her to go home, Audrey goes to get her coat and ends up tripping over Gail’s Thai elephant, sending her sprawling across the floor.

Maria arrives at the barbers to find a tipsy Audrey playing table football with Ryan.

Meanwhile Gail is at her wit’s end with her mother and tries to talk some sense into Audrey.

However when Gail brings up her drinking, Audrey hits the roof and announces she’s moving back home immediately.

In the barber’s Audrey staggers into the motorbike which fall and knocks her over.

She cries out for help, but will anyone hear her?

Trina arrives for her first sex therapy session and urges Sally and Tim to gaze into each other’s eyes.

However Tim feels awkward, declaring it a con and a waste of time.

Sally is disappointed with her husband’s attitude. Will Tim listen to Sally?

David reaches a decision over Max

David reaches a decision and tells Max they won’t be paying the blackmailer.

He tells his son to go to school.

At the bus stop, Max meets with up with Chris and Blake, but they start to take the mickey out of him, quoting his messages to Sonya.

Maria tells Gary that the recycling collectors are going on strike because of the extra bins she set up and it’s all her fault.

After a meeting with Adam, Peter angrily tells Carla that there isn’t enough evidence to bring Mr Thorne to justice.

Carla reckons he should just leave it. Will Peter listen to her?