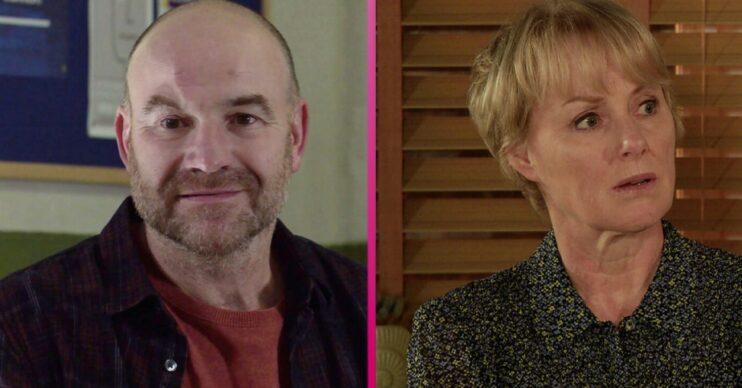 Coronation Street spoilers for next week reveal Tim Metcalfe is forced to face his fears over his impotence, .

After a disastrous, and quite cringe, attempt at role-play, Tim clams up about his ability to perform in new Corrie episodes.

Sally is desperate to talk to him about the situation but he snaps at her, leaving her annoyed.

She’s delighted and the couple have a lovely meal together.

When Sally suggests they have an early night, Tim finally opens up.

He tells her that he’s feeling both worried and embarrassed about his impotence.

Sally is relieved Tim is no longer avoiding the issue and tells him she’s happy just to cuddle.

But the next day, Tim is hostile when Sally broaches the subject again.

She tells him to make an appointment with Dr Gaddas to talk about his impotence.

But, to her relief, Tim finally sees sense and agrees to make an appointment.

Will Tim and Sally split?

He was told back in January that he needed a triple heart bypass or he’d die.

Tim decided this was not the sort of thing to share with his wife.

Instead he confided in neighbour, Aggie, who’s a nurse.

Poor Sally didn’t know anything about Tim’s health woes until it all came out when she thought he was having an affair.

She was upset to find out he kept such a big thing from her and was even more hurt when she found out Eileen and George also knew about his upcoming surgery.

She confronted him and he said he didn’t tell her about the surgery because he didn’t want to hurt her.

Sally told her husband he betrayed her and they both broke down in tears.

Has Tim learned his lesson from almost losing his wife once this year?