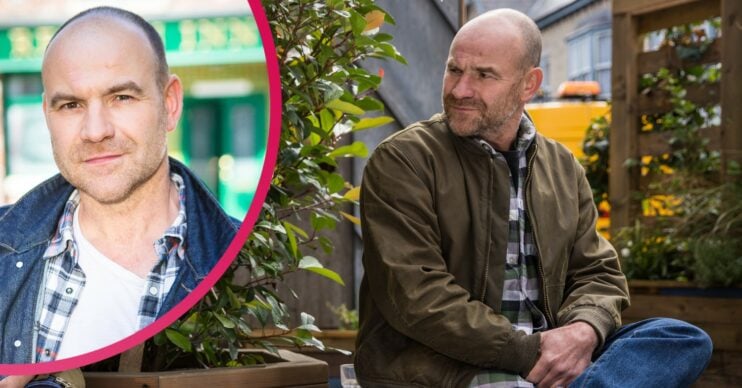 Tim Metcalfe in Coronation Street: What’s wrong with him? Is he dying?

The hapless cabbie is keeping a big secret from wife Sally

Tim Metcalfe in Coronation Street is the hapless, good-natured husband of Sally Metcalfe, and dad to Faye Windass.

Tim’s dad was the domestic abuser Geoff Metcalfe, and his mum is Elaine Jones – though he only got to know her recently.

Tim Metcalfe is played by actor Joe Duttine. He was already a familiar face to television viewers thanks to his role as Cameron Donnelly in Shameless.

He also appeared in Life On Mars, Waterloo Road, The Village, and Scott and Bailey.

The pair are engaged and planning to tie the knot in 2022.

Arrival on the cobbles

Faye quickly became smitten with her dad, but though the pair managed to repair their relationship, she stayed living with adoptive mum Anna Windass when Tim moved to Weatherfield.

Tim couldn’t read or write when he first arrived on the cobbles. When he eventually fessed up to Anna Windass, she helped him learn.

Tim’s illiteracy was a result of his troubled childhood. He grew up with dad Geoff who he adored. He thought his mum was dead and that Geoff had made huge sacrifices to care for him.

But when Geoff came to Weatherfield and married Yasmeen Nazir, it became clear that Tim’s memories of his dad weren’t exactly accurate.

It turned out Geoff was controlling and abusive. Tim’s mum Eileen hadn’t died, but Geoff had driven her out of their home and kept her away from their son.

Once upon a time it was unthinkable for Sally Webster to be with anyone except Kevin. But then Sal and Kev broke up, and Sally met Tim. And now we think the Metcalfes are Weatherfield’s most perfect couple.

The couple are definitely different,  but they seem to fit. They tied the knot in 2015, but had a shock when it turned out Tim was already married!

He’d got wed in Las Vegas in 2004, and when his wife Charlie Wood arrived in Weatherfield, the Metcalfes were horrified.

Luckily Tim divorced Charlie and he and Sal remarried in 2020.

In 2018, Tim got caught up in serial killer Pat Phelan’s campaign of terror in the Street.

He managed to get Phelan to confess to his part in the Calcutta Street flats scam. And when Pat’s crimes came to light, it was Tim – along with Liz McDonald – who raced to find Eileen Phelan, who was involved in a confrontation with her violent husband.

Tim and Sally started a health kick as 2022 dawned. The pair went for an MOT with Dr Gaddas at the health centre.

Tim told Sal he’d got a clean bill of health, but he wasn’t telling the truth. Instead he’s got heart trouble and is waiting for a vital op.

But Sally’s still in the dark and beginning to think their marriage is in trouble, instead of her husband’s ticker.

With Tim’s health taking a turn for the worse, could this be the end for the Metcalfes?