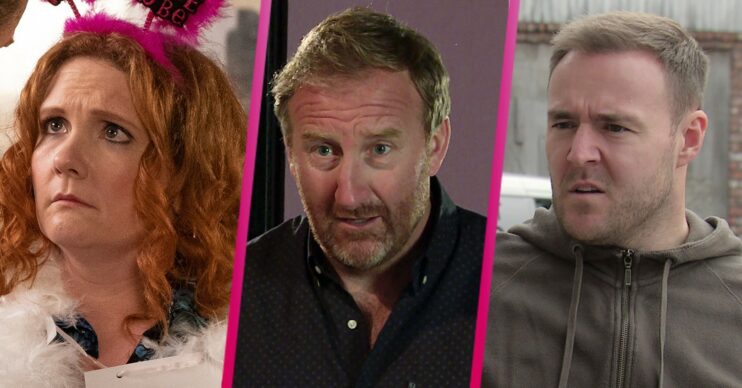 Camilla arrives and drops a bombshell

Coronation Street spoilers for next week reveal Tyrone decides to tell Fiz how he really feels.

But with all these things going on, will the wedding go ahead?

Evelyn is convinced that Mimi is faking her injury and tells Fiz she thinks she has a plan to sabotage the wedding.

As an argument breaks out between the two, Phill is annoyed with Fiz for not giving Mimi the benefit of the doubt.

Later on the street they’re stunned when a beautiful woman steps out of a car and introduces herself as Phill’s ex-wife, Camilla.

Phill is confused as to why Camilla has turned up but assures Fiz she can’t wait to marry her and his ex-wife is no threat.

Meanwhile Tyrone opens up to Kevin about his feelings for Fiz and he encourages him to tell her how he’s feeling before it’s too late.

Later Evelyn is forced to apologise to Mimi. Elsewhere Fiz feels like she should invite Camilla to her hen do.

After Tyrone tells Fiz how he feels, Fiz visits him at the garage.

She tells him that although she does love him, she no longer trusts him after what happened with Alina and she will be marrying Phill.

At the hen night, a game of Mr and Mrs proves that Camilla knows Phill far better than Fiz does.

But Fiz gets a shock when Camilla tells Fiz that she and Phill are still in love and he wants to get back together.

Fiz confronts her fiancé about the emails he’s been sending Camilla, but he insists he doesn’t know anything about it.

He begins to suspect Mimi may of had something to do with Camilla’s arrival and banishes her from the house and wedding.

Will the wedding go to plan?

Fiz and Phill’s wedding day doesn’t get off to a good start when they learn the registrar has been cancelled. However they manage to get things back on track.

As the wedding is about to start, Evelyn and Tyrone take their seats as they prepare to watch the couple take their vows.

But will it all go to plan?