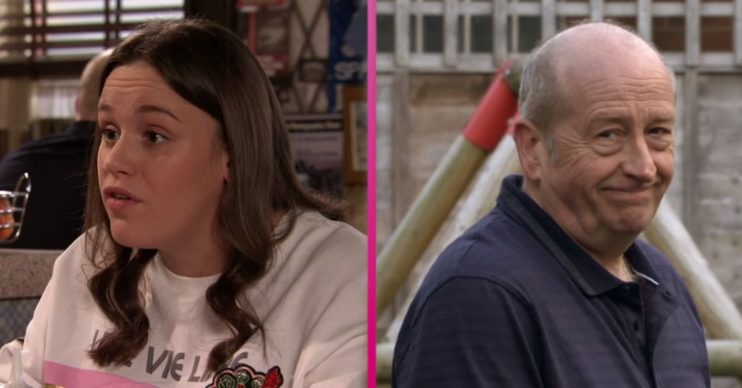 Faye has so far refused to believe Geoff abused Yasmeen

Coronation Street previews reveal Faye overhears Geoff and Elaine’s conversation and starts to become suspicious. Is she about to learn her grandad’s true colours?

In next week’s episodes, preview pictures show Elaine approach Sally and introduce herself as Tim’s mum. She tells her all about Geoff’s dark past.

Meanwhile Sally urges her not to give up on Tim and says he will one day understand why she left.

As Elaine heads out to look for her son, she’s horrified when Geoff approaches her instead. What extent will he go to in order to protect himself?

Later the police turn up and Geoff insists that his first wife is dead. However, Faye has overheard Geoff and Elaine’s conversation and is suspicious.

Is she starting to realise her grandad isn’t as innocent as he’s been making himself out to be?

And with the walls rapidly closing in on him, what will Geoff do next?

Coronation Street viewers know Faye has been supportive of Geoff since the start.

However, when Sally began to believe Yasmeen’s side of things, it caused a bit of a divide as Tim and Faye stood by Geoff.

A couple of weeks ago, Sally kicked Geoff out. As he moved back into No.6, Faye decided to go with him.

This led viewers to speculate that Faye would find out the truth about Geoff’s abuse.

Elaine made her first appearance last week and revealed to Yasmeen that she was once in a relationship with Geoff.

She explained that Geoff abused her for years and she eventually managed to flee.

This week, she agrees to give evidence against Geoff to help Yasmeen. But how will Geoff react when he finds out his past is back to haunt him?

Do you think Faye is starting to see Geoff’s true colours? Leave us a comment on our Facebook page @EntertainmentDailyFix and let us know what you think of this story.