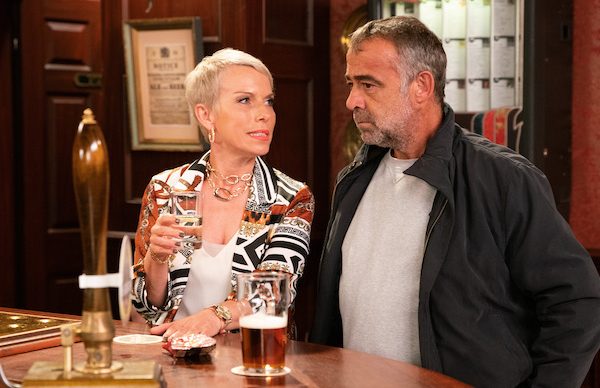 Debbie made a brief return to the Weatherfield last year after 34 years away!

Michael Le Vell, who plays Kevin Webster in Coronation Street, would love to see his on-screen sister return so he can do more scenes with actress Sue Devaney.

She recently appeared as Kev’s sister Debbie, and proved a huge hit with viewers.

Now it seems the soap star was popular with co-star Michael too!

He said: “It was great working with Sue Devaney who plays Kev’s sister Debbie, I’d love to see her come back to Weatherfield and find out the mess that Kev has got himself into.

“He could do with someone to keep an eye on him.”

She came back with a big shock for her brother – their Auntie Val had died. She’d also left her £200,000 solely – but she wanted Kevin to have it as she’d done alright for herself financially and didn’t need it.

Kevin is caught up in some major drama at the moment, as this week he covered for love interest Abi Franklin after she torched Ray Crosby’s car.

Michael also revealed that, as an actor, he “loves” getting to work on deeper storylines.

He told Inside Soap: “You don’t want your character to get too settled and I love the drama, Kevin seems to attract drama so that is great.

“It doesn’t always need to be about romance either.

And with Corrie celebrating its 60th anniversary this year, the long-running cast member admitted he never expected to still be part of the team.

He said: “Not at all, I was brought in for 12 episodes then got asked back, I never thought in a million years that I would be here this long.

“I get asked all the time if I still love it and I really do, doing a job that I love means it doesn’t feel like work.”

The 55-year-old actor, who has played mechanic Kevin on the cobbles since 1983, admitted despite his long run on the ITV soap, he gets “a buzz” every time he reads the new scripts.

He said: “I love every day, I still look forward to getting my scripts and finding out what is going to happen to Kevin.

“I still get nervous when I have got big scenes, it still gives me a buzz.”

Would you like to see Sue return as Debbie?