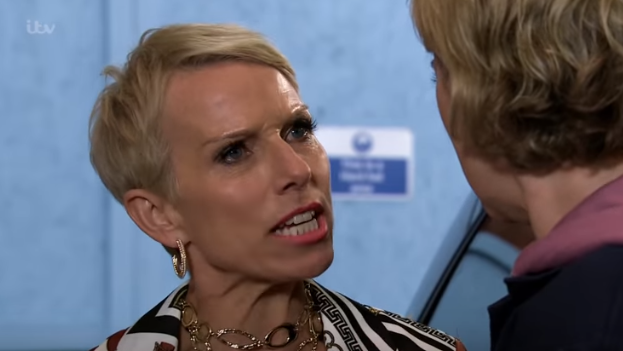 Some viewers mistook her for Annie Lennox!

The 52-year-old actress, who is also known for Dinnerladies and Casualty, reprised her role as Kevin Webster’s sister Debbie Webster, who returned to the cobbles for the first time since 1985 to attend her Auntie Vi’s will reading.

“So natural, so good. My boss had better be listening x #bringbackdebbiewebster (sic)”

Sally’s views were shared by a number of Corrie fans, including Emmerdale actor Liam Fox.

He tweeted: “Just spotted #suedevaney on @itvcorrie, she’s always been an amazing actress, hoping she’s on our screens for a long time to come (sic)”

Just spotted #suedevaney on @itvcorrie, she’s always been an amazing actress, hoping she’s on our screens for a long time to come 👍 https://t.co/QwZcZmLO2f

Another Corrie viewer wrote: “Sally we are giving you the job of getting Debbie Wesbter back in Corrie permanently pretty please!!! (sic)”

But some viewers were confused about Sue’s identity, mistaking her for Annie Lennox.

One wrote: “My wife just said “why is Annie Lennox on Corrie? (sic)”

What is Annie Lennox doing on Coronation Street? #corrie #itv

Debbie previously left Weatherfield when she moved to Southampton in 1985.

Did you see Debbie back on the cobbles last night? Leave us a comment on our Facebook page @EntertainmentDailyFix and let us know what you think!