Fans of Coronation Street have been given a first look at the aftermath of Gary Windass' brutal attack on Ryan Connor.

In upcoming scenes Gary, played by Mikey North, goes after Bistro worker Ryan and assaults him. 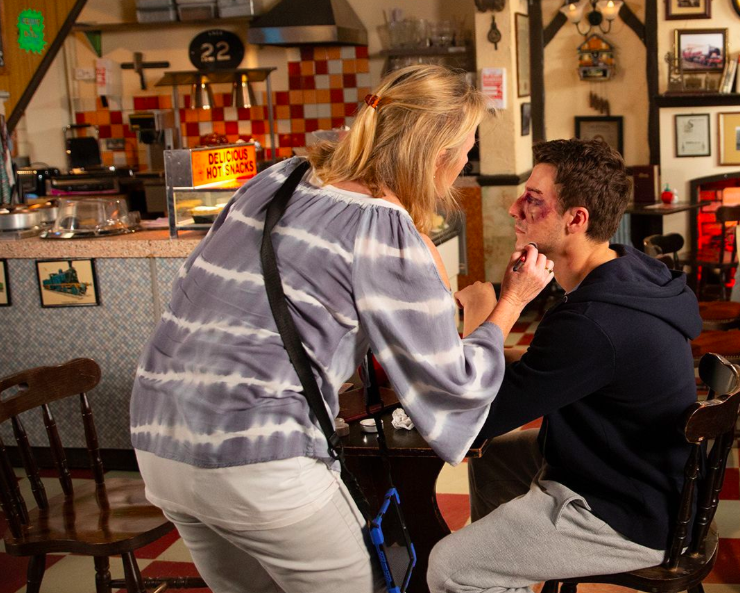 In the pictures, the Gary and Ryan are seen in an alleyway. Ryan looks nervous as Gary begins throwing punches at him and pins him up against a wall.

Gary then appears to get more violent and kicks him.

Ryan can be seen trying to escape, but the villain grabs him by the neck and drags him back for more blows.

Actor Ryan Prescott, who plays Ryan, was wearing huge pieces of body armour to protect himself while filming the brutal scenes.

Poor Ryan is seen with a swollen eye and blood on his face in other pictures from the attack.

And now the soap has released a new picture showing the devastating aftermath of Gary's assault.

Ryan sits in the cafe covered in bruises, having been cleaned up and helped back to Weatherfield after Gary fails to kill him.

But with Ryan now knowing how dangerous Gary is, could his veneer as a simple builder be about to come unstuck?

Viewers found out Gary was responsible for the factory roof weeks ago.

As he was tied up and about to be murdered by Rick, he managed to call his ex-girlfriend Sarah whilst the loan shark was out of the room and left her a voicemail confessing.

Gary managed to escape Rick when the police turned up. He then realised Sarah didn't have her phone as it was taken by Carla Connor whilst she was having hallucinations. He managed to get the phone off Carla and deleted the voicemail with his confession.

Gary later murdered Rick himself when he escaped the loan shark's clutches, but now he is becoming far more villainous than Rick could ever be.

Is Gary going too far? Leave us a comment on our Facebook page @EntertainmentDailyFix and let us know what you think!