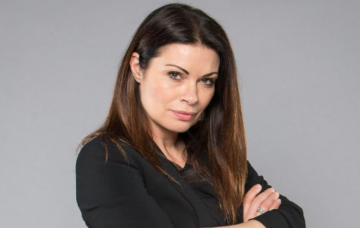 From the moment she strutted into Weatherfield brandishing two bottles of bubbly in 2006 Carla Connor has made her presence felt.

A latter day Elsie Tanner, played as a fierce, sassy but emotionally scarred and deeply complicated woman by Alison King, Carla is one of the modern greats of the Street.

She has been kidnapped, raped, cheated on, framed, gained a kidney, lost a half-brother and a baby and is now buckling under the guilt of her factory’s roof caving in which killed Rana.

Most of all Carla is a fighter, as Tracy Barlow knows to her cost. Whatever life chucks at her she will face it head on, however much it damages her in the process.

Carla and the Connor family

It wasn’t until 2015 that Carla discovered that her dad was Johnny Connor, the result of an affair. Realising that she had married her cousin, Paul, Carla went off the deep end.

The good news was that she was able to build good relationships with half-sister Kate and half-brother Aidan, which made up for her other half-brother Rob being locked up for murdering Tina McIntyre.

The strength of this new family bond showed when Aidan gave Carla one of his kidneys. All of which made it even more devastating when he took his own life in 2018.

There was nothing Carla could do to save Aidan. Underworld’s roof landing on Kate’s bride-to-be Rana’s head on their wedding day is another matter.

“Things you enjoy are generally bad for you.” That was Carla in full cougar mode with hot young doctor Ali. It’s a sentiment that could apply to her love life in general.

Her first great love was Liam Connor, bumped off by jealous second husband Tony Gordon. There was marriage to Nick, blown by Tracy revealing Carla’s one night stand with Rob Preston.

When it comes to mad crazy love though no one comes close to Peter Barlow. She married him once in 2013 before Tina McIntyre came between them and Carla suffered a miscarriage.

“I can’t deny how I feel about you anymore. I’m sitting in your dad’s car with a topless mermaid telling you I still love you,” she told him recently. Could this time be different?

Carla and the Underworld: the factory that could destroy her

After first husband Paul’s death in a car crash in 2007 Carla was left as the majority owner of lingerie factory Underworld. It’s a business that has caused her untold grief ever since.

She was held hostage in it with Hayley Cropper in 2010 by control freak second husband Tony Gordon before he set light to it and burned himself to a frazzle in the process.

One of her worst decisions was selling 40% of it to Frank Foster and not believing her PA Maria when she told Carla that Foster had attempted to rape her.

Her current Underworld woes look insurmountable. Rana is dead. Gary is demanding £10,000 in hush money and health and safety inspector Wayne is closing in on his prey.

There is nothing more magnificent than a hacked off Carla. Plenty of folk have fuelled her anger.

Peter selling his half of Underworld to Nick did. Tina sleeping with Peter on Carla’s wedding night most certainly did.

In the past if you really wanted to see her going all guns blazing all you needed was Tracy Barlow. It was Tracy who framed her for the Victoria Court fire which killed Kal Nazir and Maddie Heath.

After that Carla was going to throw herself into a quarry on the toss of a coin when Tracy finally confessed. Thankfully since then Carla and Tracy have moved on.

“Know this, I am bitterly disappointed in you.” She can deal with most things but those words from Roy cut Carla to the quick and she cried buckets.

To be fair she was doing her best to protect him. It was Roy’s sleepwalking that caused the fire on Peter’s boat but it shows just how much she cares for him.

Carla was there for Roy and Hayley through the last months of her pancreatic cancer and even read a poem at Hayley’s funeral.

The most reassuring words as Carla did a runner with Peter over her current factory woes came from Roy. “You know where I am if you need me.” Always.

Is there anything Corrie’s writers haven’t put Carla through? She’s survived homicidal husbands, terrible family tragedies and Tracy Barlow at her most vindictive.

The one that Alison King has said was “emotionally tough” to play was Carla’s rape by controlling fiancé Frank Foster in 2011.

The  jury’s ‘not guilty’ verdict almost broke her but later she forced a confession out of him and rebuilt her life after he was killed by Anne, his disgusted mother.

Her latest storyline in which Carla begins to have psychotic episodes as a result of the guilt she feels over Rana’s death looks like her most challenging to date.

Read more: Carla Connor to have her own special episode

“You keep buzzing in my ear like an irritating fly. Can you please leave us alone. Or I’ll flatten ya.” A grieving Carla keeps it simple for Alya at Aidan’s funeral.

What’s your favourite Carla Connor moment? Leave us a comment on our Facebook page @EntertainmentDailyFix and let us know what you think.