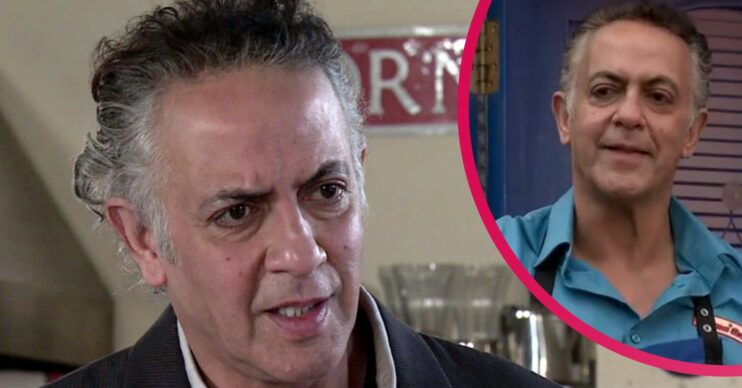 How much for a backstreet takeaway?!

In Coronation Street last night (Wednesday, February 23) Beth bought a kebab from Dev’s shop and viewers were shocked by the cost.

Although it seemed a pricey for a backstreet takeaway, Beth didn’t have a problem with it!

How much is a kebab in Dev’s shop on Coronation Street?

Dev was serving Beth after being stuck working there following his fallout with Bernie.

It soon became clear even Dev was getting confused over the pricing!

He brought Beth her kebab and she quickly told him she’d ordered and paid for two.

“Are you sure?” he demanded.

Beth said: “I’ve got six quid change out of a twenty, explain that?”

That means her order cost £14, which makes each kebab £7!

Fans horrified over the cost

Viewers at home couldn’t believe how much the kebab was.

One questioned whether it was just because they were “from Yorkshire” that he thought it was too expensive.

Another suggested £2 was more accurate.

£7 a kebab! Bloody hell the last time I bought one they were £2, but that was 25 years ago #corrie

Dev’s kebabs are £7 each? Is that too much, or am I just from Yorkshire? #Corrie

Are Bernie and Dev getting back together?

Bernie stepped in to help Dev get out of his pickle with Beth, securing her job back, plus a pay rise.

But she made it clear she was only returning to the kebab shop and not into his arms.

Bernie and Dev were a couple for roughly one day before it all ended in tears when he accused her of stealing Joseph’s search fund.

Although she was partly guilty, she paid all the money back and insisted she hadn’t had any part in the lad’s disappearance.

Dev didn’t believe her and they split up.

Meanwhile, Dev has swiftly moved on and is eyeing up Linda Hancock.

He’s trying his luck, giving it as many smoldering looks as he can muster, but so far she hasn’t taken the bait. She’s also planning to leave for Portugal again soon.

Will Dev turn back to Bernie once Linda’s off the scene?