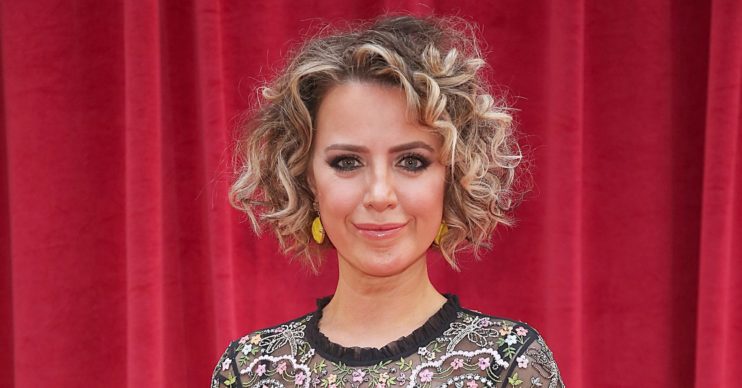 She captioned the post: “Thank you @pandamoanimum for the much needed laugh. It’s all in the detail.

Friends and fans commented on the Sally’s snap.

One fan wrote: “You look stunning.”

Sally plays mechanic Abi Franklin in the ITV soap. Last month the actress got engaged to her co-star and boyfriend Joe Duttine, who plays Tim Metcalfe in Corrie.

The pair were first spotted together in 2018 and moved in together last November.

On the show, Sally and Joe’s characters live together, as Abi lives with her friend Sally and Sally’s “husband” Tim.

Although the two character’s live together, they don’t share many scenes together.

But Sally explained she is glad the two characters don’t speak much because he “twinkles” on set and she isn’t sure she could get  through the scenes.

When it was suggested the pair don’t do many scenes together she said: “It’s just as well because he twinkles on set and it’s impossible. I can’t deal with it all.”

But Sally admits it can all get confusing on set when it comes to names.

It’s just as well because he twinkles on set and it’s impossible.

As well as being called Sally, her co-star Sally Dynevor’s alter ego is also called Sally.

Have you ever worked with your partner? Leave us a comment on our Facebook page @EntertainmentDailyFix and let us know what you think of this story.