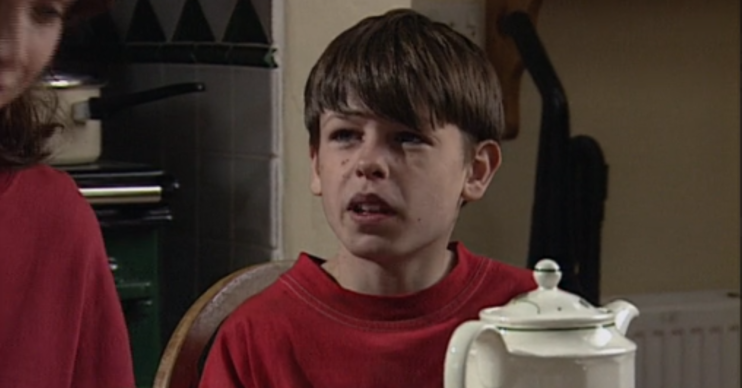 He was so tiny!

In yesterday’s (Tuesday, June 26) double bill of Classic Emmerdale on ITV3, Andy made his first appearance as he played with Robert, who would go on to become his adoptive brother.

Immediately fans were stunned by the debut – especially seeing how small Andy was!

@emmerdale @kelvin_fletcher Watching old episodes of #Emmerdale and who should appear? Only Andy #KelvinFletcher How cute ☺️ pic.twitter.com/0JECK04iyM

Aww he looks so cute.

Over the years, Andy became a big part of the village. In 2000, Andy was officially adopted by the Sugdens.

However the same year his adoptive mum, Sarah, died in a barn fire, which was set by Andy for the insurance money.

Andy went on to marry his classmate Katie Addyman. But she had an affair with Robert.

He later began dating 15-year-old Debbie Dingle. But despite the Dingles not wanting them to be together, she ended up falling pregnant with Andy’s daughter who she named Sarah.

Their relationship didn’t last, however Sarah became ill in 2011 with Fanconi Anemia. When they struggled to find a donor, they decided the only way to save their daughter was to have another baby.

Katie and Andy eventually remarried, but she was killed after an argument with Robert.

In 2016, Andy fled the village when Robert’s ex-wife Chrissie tried to set him up for shooting her father Lawrence.

Robert helped his brother escape and got him a new passport. They put their lifelong feud behind them as they said their goodbyes.

After leaving Emmerdale, Kelvin went on to appear on Strictly Come Dancing 2019 series.

Read More: Emmerdale’s Lucy Pargeter opens up about struggles of being a single mum in lockdown

Kelvin was a last minute contestant. He replaced Made In Chelsea’s Jamie Laing who suffered an injury. However, he went on to win the series with partner Oti Mabuse.

Will Kelvin Fletcher return to Emmerdale?

Earlier this year, Kelvin ruled out a return to Emmerdale whilst chatting to Lorraine Kelly. But he later stated he would like a role on Coronation Street.

He was quoted by The Sun newspaper’s TV column as saying: “I’d love to go back to a soap. Coronation Street would be great.”

Did you see Andy’s Emmerdale debut? Leave us a comment on our Facebook page @EntertainmentDailyFix and let us know what you think!