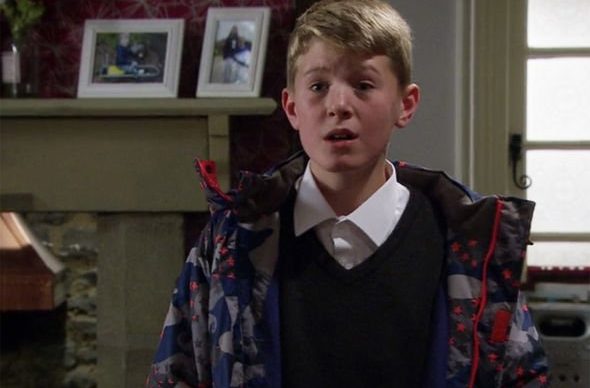 Alfie has been at the centre of a bullying storyline

On Alfie’s mum’s Twitter account, she posted a picture of her son holding up a chocolate plaque which said: “Emmerdale NTA winners 2020!”

Alfie was surprised to get this in the post this morning. Lovely touch @emmerdale pic.twitter.com/IR6V8uTWiX

Alongside the picture, Fiona wrote: “Alfie was surprised to get this in the post this morning. Lovely touch @emmerdale.”

Emmerdale won the accolade last month, but some fans were divided over the soap’s triumph.

Over the last few months Alfie’s alter ego has been at the centre of a bullying storyline, where Arthur has been targeting little Archie Breckle.

Archie returned to the village after his mum Rachel unexpectedly died.

The little boy was brought back to the village by his uncle Dan and started living with his dad Jai.

Jai, who was in a relationship with Arthur’s mum Laurel Thomas, struggled to get the little boy to talk, but it was Arthur who got Archie to open up.

He hit Archie, causing him to pass out, said horrible things about him and Rachel, and caused Archie to run away.

A couple of weeks ago, Laurel learned her late husband Ashley’s dad, Sandy, had died in Australia.

Thinking he was being punished for bullying Archie, Arthur confessed what he had done to Laurel.

Although Laurel insisted they told Jai and Jimmy, who had been accused of hurting Archie, the truth, she decided to keep quiet until after Sandy’s funeral.

Currently Laurel, Arthur, his half-sister Gabby and sister Dotty are in Australia, but will Laurel get Arthur to tell the truth when they return?

Although Arthur has been bullying Archie, in real life, young actors Alfie and Kai Assi are “best buddies.”

Do you think Laurel should get Arthur to come clean?