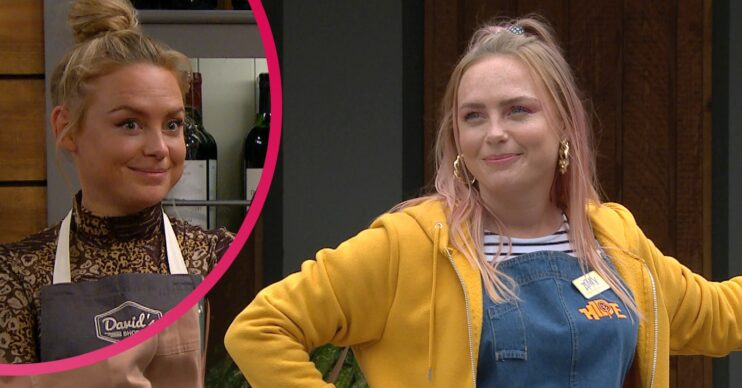 Amy Wyatt in Emmerdale: Who is she? Is she a killer? And what’s her link to Cain Dingle?

She had a troubled youth but is her dodgy past really behind her?

Amy Wyatt in Emmerdale is mum to little Kyle Dingle, devoted girlfriend to Matty Barton, and daughter of Kerry Wyatt.

She had a troubled youth, with all sorts of ups and downs, and a period away from Emmerdale when she seemed to get her life back on the straight and narrow.

Read more: Who is Andy Sugden in Emmerdale? Will he ever return?

Now she’s happily loved up with Matty, and working hard at the HOP. But Amy’s hiding a killer secret. Will it be revealed any time soon?

Who plays Amy Wyatt in Emmerdale?

Amy Wyatt in Emmerdale is played by Natalie Ann Jamieson. She is the second actress to take on the role.

Amy had roles in Vera and Doctors, as well as on the big screen in I, Daniel Blake, before she got the part of Amy Wyatt in 2019.

When Amy first arrived in Emmerdale as a teen, she was played by Chelsea Halfpenny.

She was already known to viewers because she’d been in Byker Grove as a youngster.

And since leaving Emmerdale, Chelsea’s career has blossomed. She’s starred in Casualty and on the stage.

Amy Wyatt arrived in Emmerdale as a troubled teen when her car broke down. She was in trouble having run away from foster care, but she won over Val Pollard who, along with husband Eric, took Amy in.

It wasn’t all plain sailing for Amy, though. She fell for David Metcalfe, who didn’t return her feelings, and slept with (much) older man Cain Dingle.

When Amy found out she was pregnant, Cain threatened her unless she had an abortion. But she didn’t go through with it and instead hid her pregnancy until she gave birth alone in the church.

Though Amy tried to make it work as a teen mum, she eventually gave little Kyle up for adoption.

When Amy found out Kyle’s adoptive parents had died, she went to the funeral and made friends with his grandmother Joanie Wright.

She didn’t tell Joanie who she was, but began getting to know the little lad.

When Joanie found out, she was furious and stopped Amy seeing her son. She eventually relented but when Amy decided she wanted to have custody of the little boy, Joanie vowed to fight her.

With no legal right to see Kyle, Amy took drastic action. She kidnapped the tot and fled. Cain followed and managed to talk her out of taking her son.

Though Amy handed him over, she decided to leave Emmerdale forever.

In 2019, with Joanie dead and Kyle living with Cain – who was facing a murder charge for ‘killing’ Joe Tate – Kerry decided to track her daughter down.

Amy came back to Emmerdale, determined to fight for her son. With Cain and Moira’s support she told Kyle she was his mum.

Mum and son have now started to build a relationship.

When Karen, an old mate of Amy’s, showed up in the village demanding money, Amy was shocked.

Amy had stolen thousands of pounds from Karen and she wanted it back.

Desperate for the cash, Kerry and Amy pilfered a charity collection from the sweet factory.

But when they destroyed the CCTV to stop it showing their theft, they started a fire that ending up killing Frank Clayton.

Frank’s daughter Tracy discovered the truth about how her dad died and shoved Kerry who suffered a head injury. Worried she’d get the blame for hurting Kerry, Tracy decided to keep quiet about the truth about her dad’s death.

It took them a while to get together, but Amy and Matty Barton are officially a couple now and they’re super-cute.

Amy’s stood by Matty as he wrestled with decisions about surgery, and he’s been a rock to her, too.

But will he be so supportive if the truth about her part in Frank’s death is revealed?

Is Amy Meena’s next victim in Emmerdale?

Amy and Meena have been squaring up this week after things didn’t go the way that murderous Meena was planning during the deadly survival challenge.

She’d hoped to kill Victoria and get her boyfriend David to herself, but she failed.

Now David and Vic are all loved up, and dumped Meena is determined to win back her man.

Nicola, who also once dated David, eggs Meena on but neither Amy nor Manpreet are impressed.

On hearing that the new couple has gone to Portugal for a break, she lets herself into Vic and Amy’s house and trashes the place!

When Amy comes home to find her place turned upside down, she knows exactly who’s responsible.

She immediately calls the police, and PC Swerling is soon knocking on Meena’s door.

However, during the informal interview, Meena denies everything and no arrest is made.

Amy is incensed when she hears Meena has seemingly escaped justice and confronts her in the street.

It looks like the girls are going to come to blows until Billy jumps in to break up the drama. But something tells us this is far from over between Meena and Amy…

What do you think? Leave us a comment on our Facebook page @EntertainmentDailyFix and let us know w