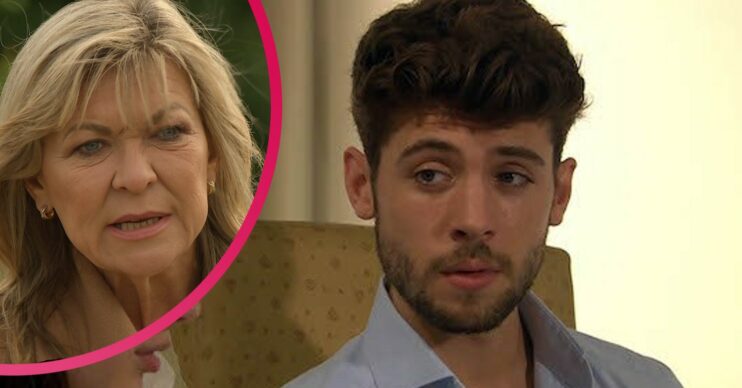 Emmerdale: Is Joe Tate dead? Where is he now?

Suave, sophisticated, and more than a little bit sexy...

Emmerdale character Joe Tate hasn’t been seen on screen since 2019, but is he still alive?

Fans often believe he’s involved in plots from afar, still keen to stir up trouble despite not living in the Dales anymore.

So who is Joe Tate? What happened to him? Where is he now? And did he die?

Who are Joe Tate’s parents?

Joseph Tate was born on June 8 1995 to parents Chris Tate and his wife, Rachel Hughes.

Two years after he was born, Joe’s parents divorced, and his mum Rachel obtained custody of the little lad.

However, shortly before Joe’s fourth birthday, Rachel was pushed off a cliff to her death by her psycho new boyfriend, Graham Clark.

Following his mum’s death, young Joe went to live with his dad Chris. When his father later married Charity Dingle,  Joseph decided he wanted to go away to boarding school.

After Chris took his own life in 2003, custody of Joseph was transferred to his aunt, Zoe Tate.

In 2005 Joseph left the village along with Zoe and her young daughter, Jean.

Joe has a younger half-brother, Noah, whose father was also Chris Tate.

When did Joe Tate return to Emmerdale?

In 2017, Joe returned to the village after 12 years away, under the alias Tom Waterhouse.

Tom – along with his trusty sidekick Graham Foster – plotted to lure Charity and Debbie Dingle into their shady business dealings.

Debbie soon fell for ‘Tom’, and before long the pair were embroiled in a relationship. ‘Tom’ even bought Debbie a house and supported her through her daughter Sarah Sugden‘s life-threatening illness.

However, Debbie was devastated when Tom revealed his true identity – he was actually Charity’s former stepson, Joe Tate!

His romance with Debbie had all been a ruse to get revenge on Charity, because he believed that she was the one who drove his dad Chris to suicide.

Debbie was devastated at Joe’s betrayal, and swore that she would get her revenge, while Charity also vowed to make Joe pay for messing with her family.

How is Joe Tate related to Kim Tate?

Kim was married to Joe’s grandfather, Frank Tate, making her his step-grandmother.

Kim was in prison for fraud when Joe returned to the village – however, it was later revealed that she was actually the mastermind behind his plot to get revenge on Charity and the Dingles, and Joe had merely been carrying out her bidding.

Joe had led everyone to believe that he owned Home Farm in Emmerdale, along with the rest of the Tate fortune. But actually, control of the whole estate belonged to Kim, and Joe was just a pawn in her wicked games.

When Kim was released from prison, she was furious to find out that Joe hadn’t been following her instructions, and had in fact been frittering away her money.

Kim demanded that Joe should be got rid of, for good, and ordered her henchman, Graham Foster, to kill him! Her instructions really tested Graham’s loyalties, and forced him to decide whether he cared more about her… or Joe.

What was his relationship to Graham?

When Graham and Joe first arrived in the village together, it was unclear what the exact nature of their relationship was. While Graham appeared to just be a paid employee, their friendship clearly ran a lot deeper.

It was later revealed that the pair met while Joe was at boarding school. Graham was the school groundsman, who developed a close bond with mischievous teenager Joe.

After Joe got in trouble for locking his head teacher in a cupboard, his aunt Zoe made Graham the boy’s legal guardian to prevent him from being expelled.

The pair remained close, and when Joe left school and launched his own business, he employed Graham as his right-hand man.

Graham appeared to be a surrogate father to Joe, and stood by him through many a sticky situation. However, Graham often questioned Joe’s actions – especially over the way he treated Debbie – and the pair often came to blows.

It was later revealed that Graham was actually working for Kim Tate – and his loyalties were tested when she ordered him to get rid of Joe for good.

After Kim ordered Graham to get rid of Joe for good, Graham had a dilemma – would he really go ahead with killing Joe?

He was all set to do the deed, until his conscience got the better of him. Realising he couldn’t go through with it, Graham handed Joe £100,000 and instructed him to leave the village for good.

Joe was ready to run, leaving his bride Debbie standing at the altar. But ultimately he realised that he loved Debbie and wanted to be with her, and decided to risk his own life to go back and marry her.

However, he never got the chance. By this point, Cain had discovered that Joe had left Debbie standing at the altar, and he was furious. So furious that he tracked down Joe and punched him!

As Joe hit the floor, Cain panicked that he had killed him. Graham confirmed that Joe was dead and told Cain that he would dispose of the body – but as he loaded the corpse into the boot of his car, viewers saw Joe’s hand twitch.

For months, we believed that Joe was six-feet under, and Cain was tortured by the belief that he had killed his daughter’s fiance.

He eventually confessed his crimes to Debbie, leading to a huge falling out between father and daughter.

In March 2019, Kim was shocked to find out that Joe was actually alive and well – and living it up in Monte Carlo!

CCTV footage revealed that Graham had helped him to escape and set up a new identity. Kim ordered a hit man to deal with him once and for all, but by that point Joe had already moved on – and currently still remains at large.

Is Joe Tate returning to Emmerdale?

There have often been calls to bring Joe back to Emmerdale, the most recent coming from Jamie Tate actor Alexander Lincoln.

With Jamie currently missing presumed dead, many fans are convinced he’s faked it – could Joe have helped him?

They both hate Kim – might Joe be returning to take revenge on his step-gran?

The door is well and truly open, but whether he’ll be back remains to be seen…