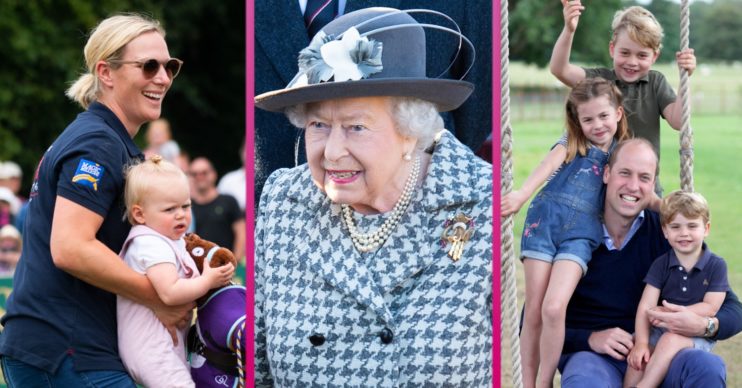 Zara Tindall baby: All of the Queen’s great-grandchildren as she prepares to welcome two more

The Queen has a total of eight great-grandchildren - and two on the way!

Zara Tindall has just announced her baby joy to the world, promising another new addition to the growing list of great-grandchildren to the Queen.

The 94-year-old monarch has a total of eight grandkids, with the majority old enough to welcome children of their own.

Here, we take a look at all the royal youngsters lucky enough to call the Queen their ‘great-granny’.

Zara Tindall baby: When should the Queen expect another great-grandchild?

Earlier this week, Zara and her husband Mike delighted royal fans as they announced they’re expecting their third baby together.

The former rugby star confirmed the happy news on his podcast The Good, The Bad & The Rugby on Wednesday (December 9).

The couple, who married in 2011, are already parents to their daughters Mia, six, and Lena, two.

Even though the children are members of the royal family, they don’t have official titles.

The Duke and Duchess of Cambridge are proud parents to three adorable children.

As the future king, Prince George is seemingly the most well-known of the Queen’s great-grandchildren.

The seven-year-old is closely followed by Princess Charlotte, five, and Prince Louis, two.

George shares a unique relationship with the Queen, with the pair often spending alone time together.

While Prince Harry and his wife Meghan may have stepped down from royal life, Archie Harrison is still very much part of the family.

The one-year-old was born in May last year, which makes him seventh in line for the throne.

Earlier this year, Archie and his parents called the monarch via Zoom to wish her a happy 94th birthday.

The couple shared the news via their spokesperson.

Zara isn’t the only royal welcoming a new addition next year – with Princess Eugenie and her husband Jack also expecting their first child.

The married pair announced the happy news in September.

The statement read: “Her Royal Highness Princess Eugenie and Mr Jack Brooksbank are very pleased to announce that they are expecting a baby in early 2021.

Zara’s older brother Peter also has two children of his own.

Along with his former wife Autumn, the pair welcomed Savannah in 2010, and then Isla in 2012.

Back in February, the couple announced their separation but vowed to remain friends.

A statement read: “They had reached the conclusion that this was the best course of action for their two children and ongoing friendship. The decision to divorce and share custody came about after many months of discussions and although sad, is an amicable one.”

The Queen says she is ‘delighted’ for granddaughter Zara

Earlier this week, the Queen broke her silence following the news her granddaughter Zara is pregnant.

A Buckingham Palace spokesman said: “Her Majesty and the Duke of Edinburgh are aware and delighted.”

Zara and Mike are yet to be publicly congratulated by other members of the royal family.

Meanwhile, Zara has previously spoken out about suffering from two miscarriages.