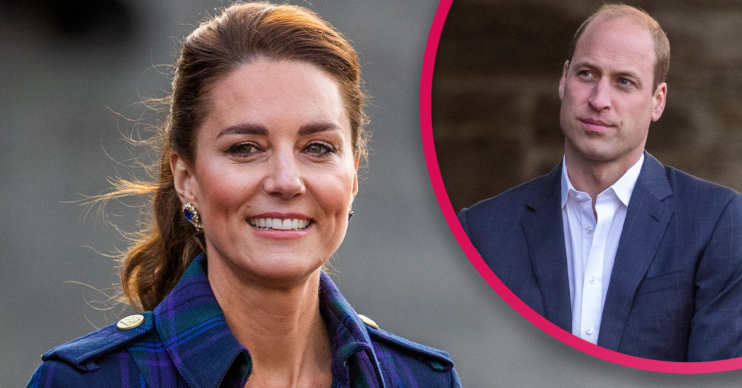 'This is what happens when I'm not around!'

Things got a little awkward for Prince William last night as he and wife Kate joined Emma Thompson and Emma Stone for a Zoom call.

The foursome linked up to chat about new movie Cruella ahead of a drive-in screening in Scotland paying tribute to the NHS last night (May 26).

Ahead of the screening, William and Kate took time to chat to the film’s stars – and things got a little awkward for the father of three.

What happened with Prince William and Kate on the Zoom call?

After chatting about the new Disney film, Emma Thompson brought up the subject of cuddling.

And it led William to reflect on a meeting he had with care home resident Betty earlier this week – ahead of Kate’s arrival in Scotland.

Posting on Instagram, a video showed the prince chatting to the 96 year old as a member of staff accused him of “flirting” with Betty.

Gentleman that he is, William duly apologised.

However, wife Kate has now responded to her husband’s friendly ways.

What did Kate say about William’s flirting?

William explained: “I got propositioned by a 96-year-old lady in a care home called Betty who wanted to kiss me.

“She’s in a care home with her daughter and I said: ‘Betty, if I do that I’ll get slapped on the back of the head for inappropriate social distancing.’

“She said: ‘Well I’ll have you afterwards them.'”

He added: “She was a right character.”

As the Cruella stars giggled at his story, wife Kate responded.

Laughing, she quipped: “This is what happens when I’m not around.”

Clearly agreeing, William laughed: “She saw her way in!”

During their date night at the movies last night, William and Kate paid touching tribute to the late Prince Philip.

The couple traveled to Holyroodhouse, where it was being held, in one of his beloved Land Rovers.

Her Majesty the Queen loaned the car to the couple for the occasion.