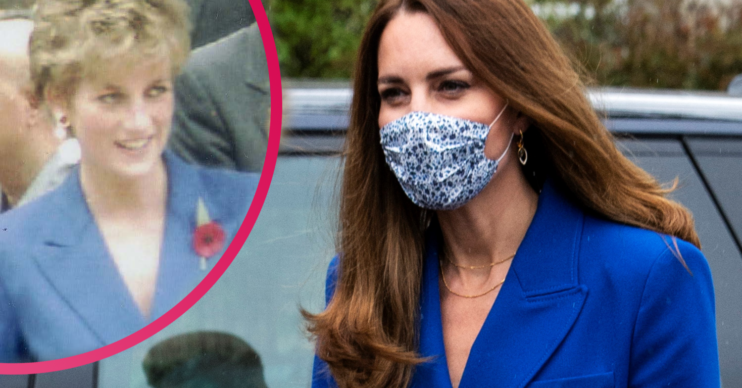 The resemblance between the two outfits is uncanny!

In the latest Kate Middleton news, she has ‘channelled’ Princess Diana on her trip to Scotland with husband, Prince William.

The 39-year-old Duchess of Cambridge wore a blue outfit that was very similar to Diana’s 1992 ensemble.

The Duke and Duchess visited Scotland yesterday on a whistle-stop tour.

Yesterday she and William visited a social care charity that deals with addiction and mental health issues.

And today the royal couple visited the Orkney Islands for the first time, sharing a cuppa with the Bichan family.

However, it was Kate’s outfit yesterday that got tongues wagging.

What did Diana wear?

Wearing an all-blue affair, she also wore a stylish double-breasted blazer and a pleated midi skirt.

To break up the Scottish all-blue, Kate wore a pair of tan heels and a matching bag.

The outfit looked uncannily similar to one her late mother-in-law, Princess Diana, wore in 1992.

In 1992, Diana would often be pictured with her lady-in-waiting, Sarah McCorquodale, or her then-husband Prince Charles on engagements.

What else did Kate and William get up to in Edinburgh?

During their stop-off in Edinburgh yesterday, William and Kate visited the Sikh Sanjog community group.

The group helps to prepare meals for vulnerable families in and around Edinburgh.

And, while they were there, the royal couple pulled up their sleeves and helped to cook up some treats.

Furthermore, they helped with rolling out chapatis, cooking curry and spooning food into plastic boxes for delivery.

Kate and William’s stint in the kitchen was met with widespread approval on Instagram, where fans also complimented their cooking skills.

One wrote: “That was a great chapati making effort I would say!”

Another said: “Both of you are accomplished cooks in the kitchen your movements are of confident cooks in a kitchen!”