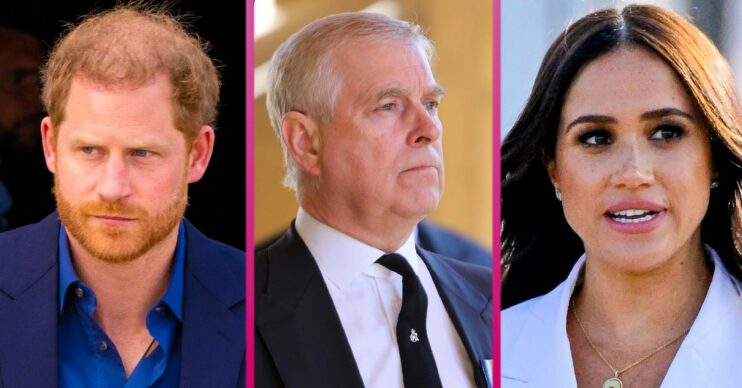 It ends months of speculation

Prince Harry, Meghan Markle, and Prince Andrew WON’T be appearing on Buckingham Palace’s balcony during the Platinum Jubilee next month, it has been confirmed.

Buckingham Palace released a statement confirming that this was the case earlier today (Friday, May 6).

It comes less than a month before the celebrations begin.

After months of speculation, it has finally been confirmed that Prince Harry and Meghan Markle WON’T be on the balcony next month.

Prince Andrew isn’t going to be there either. His daughters, however, will be.

Only working royals are going to be on the balcony with the Queen, Buckingham Palace said.

This includes the likes of Prince Charles, Prince William, Kate Middleton, and Camilla. The Cambridge children will be there too.

As Harry, Meghan, and Andrew are no longer working royals, they aren’t going to be there.

“After careful consideration, The Queen has decided this year’s traditional Trooping the Colour balcony appearance on Thursday 2 June will be limited to Her Majesty and those members of the Royal Family who are currently undertaking official public duties on behalf of the Queen,” a statement read.

There was also some speculation as to whether the Queen will appear on the balcony too.

Her Majesty, 96, has been suffering from mobility issues lately.

She has already been forced to pull out of attending numerous garden parties this month.

However, the palace confirmed that the Queen is planning on attending Trooping the Colour.

“Her Majesty is looking forward to the weekend and will be taking part in the celebrations, but her presence will not be confirmed until much nearer the time or even on the day itself,” a spokesperson said.

Will Harry and Meghan attend the Jubilee?

Whilst Harry and Meghan won’t be on the balcony, they WILL be at the Jubilee next month.

Their children Archie, three, and Lilibet, 11 months, are going to be attending too.

This means that the Queen will finally get to meet her great-granddaughter.

A spokesperson for the couple said: “Prince Harry and Meghan, The Duke and Duchess of Sussex are excited and honoured to attend The Queen’s Platinum Jubilee celebrations this June with their children.”

This news will finally bring an end to months of speculation over whether Harry and Meghan will attend the Jubilee.

Reports previously claimed that they could miss it as Harry was taking part in a polo tournament.

The Platinum Jubilee kicks off on June 2. It is going to run until June 5.