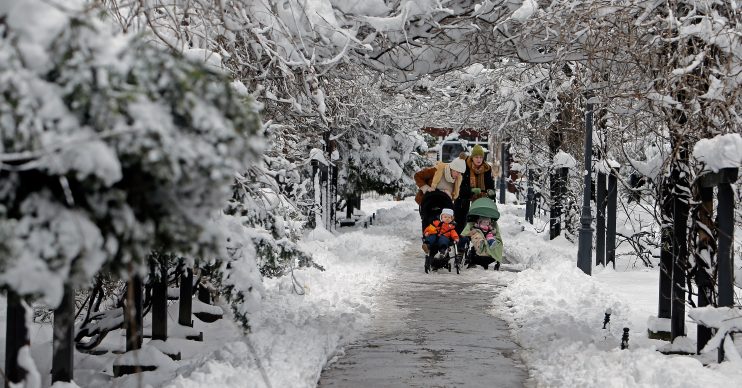 People are urged to take care

Parts of Britain could be blanketed with snow and blasted by icy winds as Storm Dennis arrives this week, close on the heels of Storm Ciara.

The Met Office has warned that Northumberland, Cumbria and large areas in Scotland look set to face “blizzard conditions”, according to The Guardian.

Yellow weather warnings are in place for the regions and higher areas could see as much as 10cm of snow, while Northern Ireland could also face further snow showers.

Similarly, flooding is a risk this weekend, with experts from the Environment Agency urging Brits to check their local flood risk and “stay safe” while walking or driving near the coast or rivers.

Environment Agency flood duty manager Caroline Douglass said: “River and surface water flooding is possible on Saturday into Sunday due to Storm Dennis and we are advising people to check their flood risk and to stay safe on the coast or when walking or driving near swollen rivers.”

Steve Ramsdale, the agency’s chief meteorologist, commented: “Another spell of very wet and windy weather is expected for Saturday. Although Storm Dennis is not expected to be as severe as Ciara, disruption is still likely.”

Storm Dennis is set to unleash three days of 60mph winds and torrential rain, according to The Mirror.

It follows chaos caused by Storm Ciara, which battered Britain over the weekend and the beginning of this week.

Another spell of very wet and windy weather is expected.

Winds were so relentless that a number of people in Britain lost their lives.

In Liverpool, a man in his 60s reportedly died when a branch fell on him while he was walking his dog on Tuesday (February 11 2020), the BBC reported.

And on Sunday, a man in Hampshire was killed when a falling tree hit his car.

According to police, the 58-year-old died after a tree landed on the Mercedes he was driving from Winchester to Micheldever.

The force said in a statement: “His next of kin have been informed and are being supported by specialist officers. The road was closed for several hours while emergency services attended. Sadly, the man was pronounced dead at the scene.”