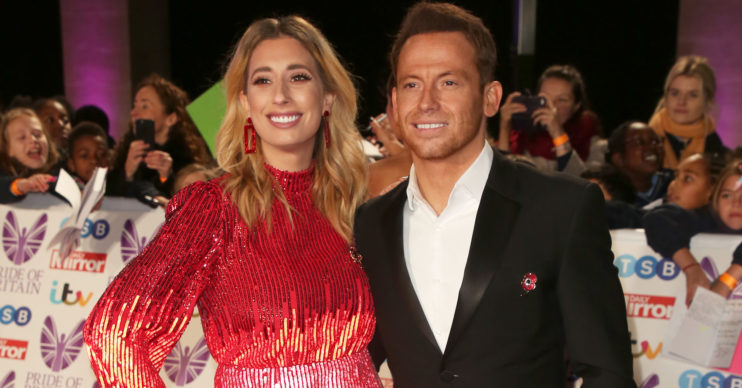 TV personality Stacey Solomon was left in hysterics after dishing up a pork chop to boyfriend Joe Swash for breakfast.

The 30-year-old presenter pulled out all the stops for Joe this Father’s Day, which kicked off with a special steak breakfast in bed.

However, it appears Stacey’s morning treat didn’t exactly go to plan after telling fans she managed to mistake the steak for a pork chop.

She documented the mishap on an Instagram Story today (June 22).

Alongside a clip of herself giggling, Stacey said: “This has really tickled me. Yesterday I made a ‘steak breakfast’.

“I saw he’d bought some meat and I thought ‘he wants me to make him a steak breakfast’.”

Stacey went on to explain she was “fuming” after finding the steak in the bin – but later realised it was a pork chop.

Read more: Holly Willoughby shares photo with kids after missing This Morning to take them to school

She added: “It was a pork chop. He said it made him feel so sick but he didn’t want to say anything because of the effort I went to.

“So he ate the rest even though it was making him gag and hid the pork chop under a piece of toast. I’m actually crying.”

The Loose Women panelist concluded the story with a snap of Joe’s breakfast, telling fans: “Looking back at it I can’t believe I thought it was a steak.”

And it appears Stacey wasn’t the only one who found the mishap funny.

One fan wrote on Twitter: “Stacey Solomon‘s insta story is so funny, yesterday she made a steak breakfast for Joe turns out it was actually a pork chop. She’s so funny x.”

Another commented: “When Stacey Solomon thinks she was cooking steak for Joe’s breakfast and it turns out to be a pork chop. Oh my god. I can’t. This women really is something else.”

Stacey previously shared a snap of Joe enjoying his breakfast on Instagram.

Alongside a photo of the 38-year-old in bed, she wrote: “Happy daddy’s day Hoe we love you so much.”

Noting how Joe wasn’t looking directly at the camera, she added: “He won’t look up at me because he’s crying. He read the card first – BIG MISTAKE.”

Meanwhile, Joe marked the occasion with a social media gesture of his own.

He uploaded a snap of his sons Harry, 13, from a previous relationship and Rex cuddling together.

“My boys,” he captioned the sweet snap.

Joe and Stacey on Gogglebox

Joe and Stacey are currently starring in the new series of Celebrity Gogglebox, which airs Fridays at 9pm on Channel 4.

In a recent episode, the pair bickered on screen as Joe hilariously compared Stacey to a “dictator” for ordering him to put household things in their proper places.