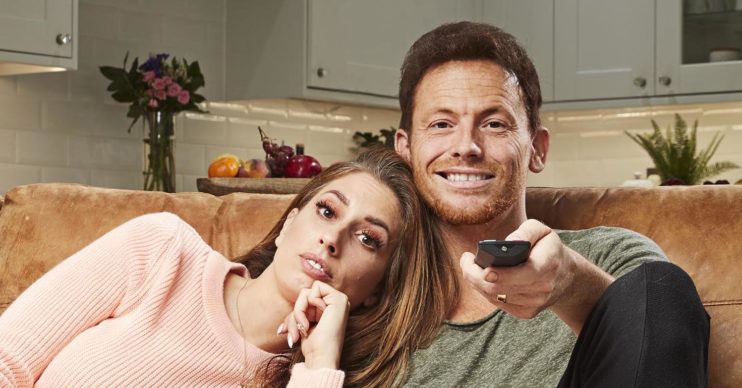 The couple couldn't stop bickering as they watched TV

The pair spent the evening having a good-natured bickering match with each other while watching TV.

Before they’d even settled down on their sofa to watch programmes such as Little Fires Everywhere, Naked Attraction and the James Bond movie Casino Royale, the couple were heard squabbling.

Complaining about their kitchen, Joe said: “Honestly I hate labels. You put labels on everything, there’s labels on the plates, on the cups…

“I’m not gonna live my life by your labels. It’s like living live with a dictator!

But Stacey shot back, exclaiming, “I’m hardly Stalin! I just want you to put the meat in the right drawer!”

Read more: Stacey Solomon thanked by fans as she shares “favourite ever” photos of son Rex

Later in the show, when they were watching Naked Attraction, the sight of naked men displaying their private parts prompted Joe to say: “You couldn’t wait to see mine!” Stacey just rolled her eyes and carried on watching.

When it was the contestant’s turn to get naked, Joe said: “I hope she’s got nice boobs.”

Stacey called him a pervert and asked: “Why do you hope that?”

He replied: “Because then I’ve gone through this whole programme and there’s a payoff at the end.”

During Little Fires Everywhere, Joe commented on a baby’s first birthday scene. Between them, Stacey and Joe are parents to four sons, including their youngest, Rex. He celebrated his first birthday last month during lockdown.

“Rex’s first birthday wasn’t eventful like that,” Joe commented.  But Stacey countered: “Well, it was eventful, we just didn’t have people round.”

Stacey also corrected Joe when he tried to say the James Bond catchphrase with his own name.

Fans of the couple commented how funny they found the couple on Twitter.

Oh my days @StaceySolomon and @realjoeswash on gogglebox are actually cracking me up. Stacey rolling her eyes every 5 mins is just so real 🤣

Another viewer wondered whether the usually loved-up couple had spent too much time indoors together.

I think Lockdown is getting to Stacey and Joe 😂😂 #Gogglebox #CelebrityGogglebox

Do you argue with your partner like Stacey and Joe? Leave us a comment on our Facebook page @EntertainmentDailyFix and let us know what you think.