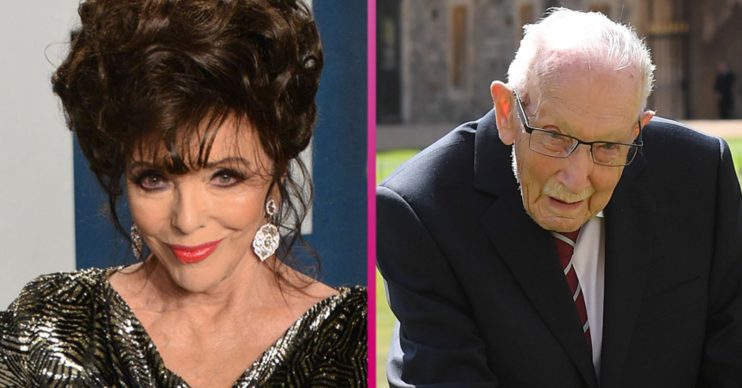 Tom was surprised by a video message from the Dame.

Joan Collins says she would love to take Sir Captain Tom Moore out for a date.

She said: “One day we should meet. And break bread – or have a cocktail.

Captain Tom responded with: “That’s nice. All those famous persons having a little word.”

Piers, who is friends with Joan, replied: “Dame Joan Collins, she wants a date Tom. Are you up for that?”

With a huge grin on his face, Tom firmly replied: “Yes!”

Piers and the live audience then erupted in laughter.

The Dame invited him out for a cocktail

Addressing her 209,000 Instagram followers, she shared a snap of Tom with the headline ‘Capt Tom I’m ready to date Dame Joan.”

Joan has been married to her fifth husband, Percy Gibson, since 2002.

Her fans are urging her to make the date happen

Dozens of Joan’s fans responded to the funny post, with many encouraging her to make the date happen.

One user urged: “I think you’d both have a brilliant time. He’s a true hero in every sense of the word and having a cocktail with Sir Tom would be wonderful.”

And another user shared: “Joan you need to meet up with this incredible man and have a drink or dinner. I think Tom would love it and Percy should come too. It would be a such a wonderful gift.”

Captain Tom’s Life Stories went down a treat with viewers, with many reportedly left in tears by his remarkable life journey.

The military veteran raised over £32 million for the NHS via his charity walk during lockdown.

He has since received a knighthood from the Queen, written a children’s book, an autobiography and even earned a number one charity single.

In the emotional sit down with Piers, he said he asked not to be resuscitated after a nasty fall last year.

He also shared his fears of ending up in a care home.

He explained: “I have always felt that if somebody is gravely ill and near to death to bring them back for them to die a very unpleasant death, why do that? If you have gone, you have gone.

“I did not want to finish up in an old people’s home without any facility of my own, having to be fed in every way. I would hate ever to be like that.”