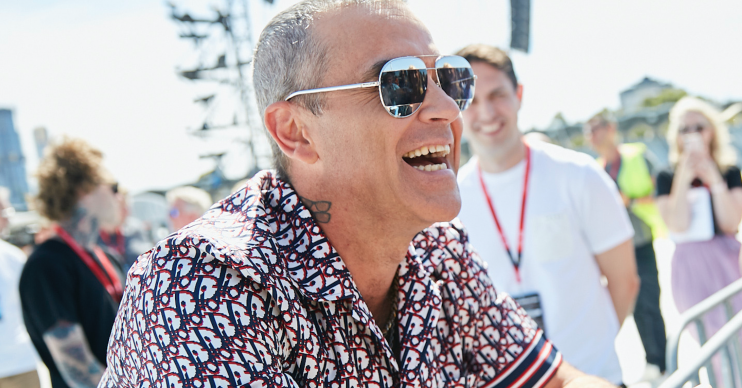 Robbie Williams wants to reunite with Take That ‘in five years’

He's got other things on his plate until then

Singer Robbie Williams is eyeing up another reunion with Take That – but maybe not for a while.

The 46-year-old pop fave reckons it is more than likely he will perform alongside Gary Barlow, Mark Owen and Howard Donald again.

But the Angels star is in no huge rush to team up with his 1990s heart throb pals. He has other projects he wants to focus on first.

Speaking on talkSPORT, Robbie told listeners: “I’ve just figured out that, and here’s a sombre thought for you all, I’m 46.

Read more: Family of Britain’s youngest coronavirus victim urge people to ‘stay at home to protect NHS and save lives’

He teased: “Will one of those be Take That? I don’t know… but I will hazard a guess and say ‘yes’.

“But I’ve got so many ideas I want to do and so many things I want to fulfil. I know what I am doing for the next five years, and it doesn’t involve Take That.”

Yes, I do want to do another gig with Take That.

Robbie also clearly stated he did want to do “another gig” with his bandmates. He last performed with them on 2010 album Progress.

The four remaining members of the group continued on after Robbie’s shock departure in 1995. But the band disbanded in 1996.

Read more: The Chase fans claim contestant was ‘robbed’ by teammates as they win £13,000

They returned with their comeback album Beautiful World in 2006, racking up number one singles with Patience, Shine and Greatest Day.

Meanwhile, Jason Orange quit Take That in 2014 and it seems he has decided on a life out of the limelight.

A reunion Robbie has recently enjoyed was with his family – after spending three weeks in quarantine following his return from Australia.

His wife Ayda Field shared the touching moment he was able to greet kids Theodora, Charlton, Colette and Beau on Instagram earlier this week.

Meanwhile pal Gary, who is self-isolating during the coronavirus pandemic, said the interruption to daily life had afforded the opportunity to concentrate on songwriting.

Positives to the lockdown

He said to Dermot O’Leary from home on the Radio 2 Breakfast Show: “I don’t mind this lockdown.

“I think there’s lots of positives. But one of the negatives right, is that when someone like you rings me and say will you come on, I’ve got no excuses.

Gary added: “I feel like I’m gloating when I tell people. But this is the time I’ve been waiting for when there’s nothing other than music to do.

“I’ve got to be honest, it couldn’t really have come at a better time so I’m really filling my time wisely, loving it.”

Best get to work on some new Take That material, Gary!