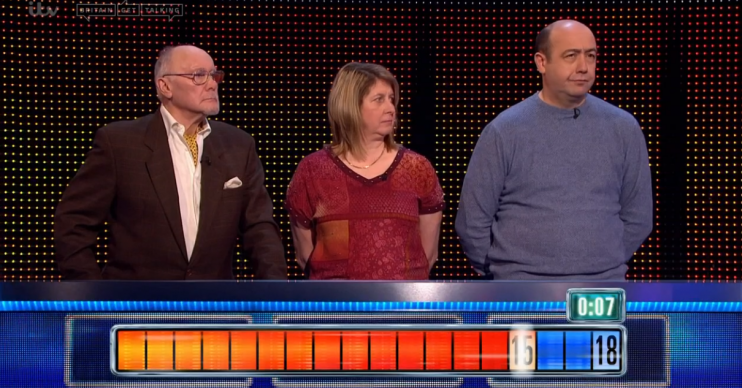 The Chase fans claim contestant was ‘robbed’ by teammates as they win £13,000

Some think he deserved the whole amount

Viewers of The Chase have claimed a contestant should have taken the whole prize fund.

Mark, Gill and Peter went against the Chaser Anne Hegerty – aka The Governess – on Wednesday evening’s show (April 1).

Read more: The Chase fans fuming over ‘easy’ questions given to Shaun Wallace

However, Mark answered most of the questions during the Final Chase.

The team bagged 18 steps ahead of the Chaser.

However, even though host Bradley Walsh said they would need some pushbacks, Anne didn’t beat the team and they took home £13,000 between them.

Gill and Peter managed to get a pushback each, meaning they were able to beat Anne.

However, viewers have said they think Mark deserves to take the money as he answered the majority of questions.

Another wrote: “Unfair for posh Peter to go back with the same amount as Mark.”

A third added: “Those two did NOT deserve the money!”

A fourth ranted: “Gutted that those two [expletive] wasters get any money at all, and have robbed Mark who did ALL the work.”

However, one person pointed out: “Well done team (Mark for the final chase, Gill & Peter for the pushbacks).”

Meanwhile, viewers also mocked a contestant for getting an easy question wrong.

During their round, Kate and the Chaser were asked: “Which of these cocktails contains ginger?”

Kate answered Tom Collins before it was revealed to be the wrong answer.

She admitted: “I thought I knew quite a few cocktails but I don’t know any of those. They’re not ones I’ve drank myself.”

Prince Harry was then revealed as the correct answer as Bradley asked Anne, who got it correct: “How did you get that?”

Bradley said: “Ah no! How did we miss that?”

Viewers were gobsmacked by Kate not figuring the answer out and shared their thoughts on Twitter.

Another wrote: “Jesus – did she really not get the Ginger reference even after being told the answer??????”

In addition, a third added: “The clue is in the question love!!! PRINCE HARRY IS GINGER.”

Jesus – did she really not get the Ginger reference even after being told the answer??????#thechase

The clue is in the question love!!!

Unfortunately, Kate didn’t make it back to the team for the Final Chase.

The Chase returns to ITV tomorrow, Thursday, April 2, at 5pm.