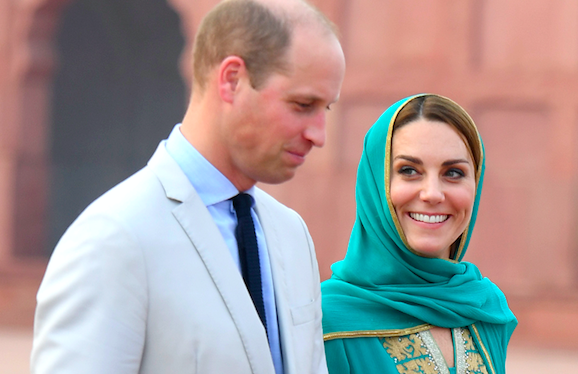 Could she be expecting baby number four?

Fans of the royal family have become convinced that Kate Middleton is pregnant again.

The speculation started after she and husband Prince William made an unusual request before they embarked on their current tour of Pakistan.

The popular couple, who are already parents to three beautiful children, are currently on a royal tour of Pakistan.

And, according to Hello!, they made an unprecedented decision with regards to their overseas tour.

Although it is typical for senior members of the royal family to travel alongside a large entourage during official duties abroad, this time – in a change from the norm – they have their doctor with them.

Royal correspondent Rebecca English tweeted earlier this week: “The couple have also, for the first time, brought with them a tour doctor. He’s a friend of William’s from his days with East Anglia Air Ambulance.”

The expert added that, normally, only the Queen and the Prince of Wales take a medic with them on trips overseas. So it’s perhaps predictable that so many fans are now wondering why…

The couple have also, for the first time, brought with them a tour doctor. He’s a friend of William’s from his days with @EastAngliAirAmb Normally only the Queen and the Prince of Wales take a medic with them.

Others came to the same conclusion when an official Instagram post shared by Kensington Palace appeared to show Kate with a slight bump.

Some pictures on the tour have shown her touching her stomach.

“Is she pregnant?” asked one.

“Anybody else spot a wee baby bump?” posted another.

Others insisted that the usually slender Kate still looked like she had a flat stomach.

The Express is reporting that Kate may be expecting twins, as odds that the Duchess will give birth next year are currently 1/5, and 4/1 that she will have two.

The Duke and Duchess of Cambridge arrived in Islamabad on Tuesday (October 15).

She looked stunning in an aqua shalwar kameez, a traditional Pakistani outfit comprised of a flared kurti, a long shirt and trousers.

Meanwhile, William looked dapper in a suit and tie as he and his wife chatted as they were greeted by a group of dignitaries and two children, who presented the Duchess with a bouquet.

Unlike the Duke and Duchess of Sussex, who took baby Archie on their recent royal tour, Kate and William left their three children – George, Charlotte and Louis – at home.