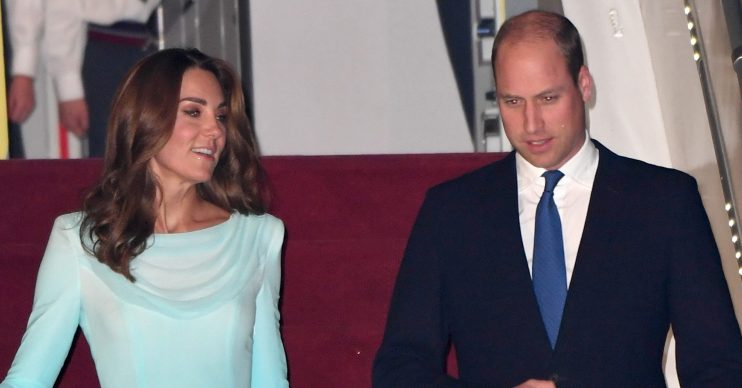 Kicking off their royal tour

Descending from the steps of the RAF Voyager to embark on their first royal tour of Pakistan, the Duke and Duchess of Cambridge most certainly made an entrance.

Kate ensured all eyes were on her as she arrived looking as fresh as a daisy from the eight-hour flight to Islamabad.

She looked stunning in an aqua shalwar kameez – a traditional Pakistani outfit comprised of a flared kurti, a long shirt and trousers – by British designer Catherine Walker.

William looked dapper in a suit and tie as he and his wife chatted as they were greeted by a group of dignitaries and two children, who presented the duchess with a bouquet.

The royal pair seemed in good spirits as they chatted to the children, who wore traditional dress.

Royal watchers commented that Kate had paid tribute to her late mother-in-law, Diana, Princess of Wales, by echoing the traditional outfits she had worn during her time in the country.

Read more: Vinnie Jones says Coleen Rooney and Becky Vardy are an “embarrassment” to their husbands

Fans couldn’t get enough of Kate’s look, commenting on a picture of the couple stepping off the plane.

One said: “The duchess looks elegant, regal and beautiful.”

A true princess. It’s not even been an hour and she already won everyone’s hearts.

Another added: “A true princess. It’s not even been an hour and she already won everyone’s hearts.”

The following day, Kate and Will embarked on their first full day of the tour – the first royal visit to the country for 13 years.

Amid enhanced security, and a reported 1,000 Pakistani police deployed to protect the couple during their trip, the couple visited a girls’ school.

Chatting to the pupils, William was told the girls were “big fans of your mother”.

The prince responded: “You were, really? Oh that’s very sweet of you. I was a big fan of my mother too. She came here three times. I was very small.”

Unlike the Duke and Duchess of Sussex, who took baby Archie on their recent royal tour, Kate and William left their three children – George, Charlotte and Louis – at home.