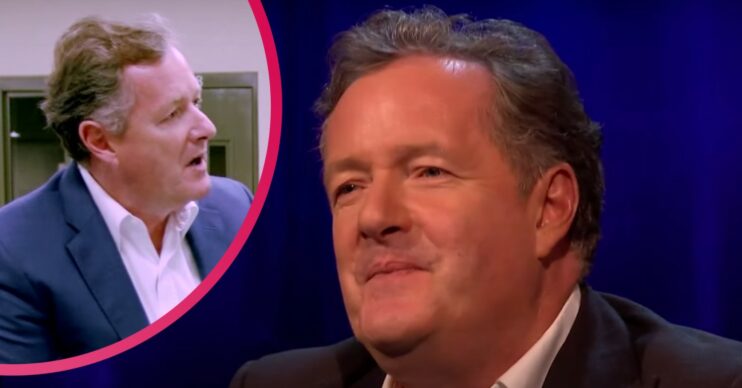 Piers Morgan tickled fans on Twitter after sharing an image that appeared to show him with a ‘third leg’.

The image – also shared on Instagram – showed the ex GMB host with his back to the sun in Los Angeles.

This meant the dramatic shot seemed to show Piers surrounded by light.

However, it also ensured a shadow from a post Piers was stood in front of cast a shadow. And the placement of that shadow made it appear as if it could be his crotch blocking out the light, should anyone’s mind be that way inclined.

Piers captioned the image: “OK. It’s time to get back to work.”

However, it wasn’t ‘work’ that was on the mind of some of his cheekiest followers.

“Great image but I’m distracted with what is between your legs,” confessed one user, adding a flushed face emoji to their post.

Someone else responded incredulously: “What IS that between your legs??!!”

Another person made a joke about ‘Morgan with the very long organ’ and yet another person joked: “Is that a winter shadow or you just really pleased to get back to work?”

“You’re not fooling us with that tripod shadow,” insisted someone else.

And yet another person wisecracked: “Still more chins than legs though.”

However, there appear to have been more responses mentioning a ‘third leg’ than anything else.

Is that your third leg mate?

“Could have edited out your third leg,” suggested one user, who included three rolling on the floor laughing emojis with their message.

Someone else asked: “Is that your third leg mate?”

Another person added: “Bet a lot of people comment on that long shadow between your legs.”

And they were right.

However, others responding with slightly more antagonistic attempts at banter, taking aim at every aspect of the pic in sight.

One person joked on Twitter, referring to how close Piers was to the edge: “You’re too close to the camera. Take three steps back.”

Similarly, someone else suggested: “Honest, you can fly. Give it a go. Tell me how it goes.”

Others pondered why the former newspaper editor was posing with one sleeve rolled up.

Read more: Piers Morgan slammed by his own fans as he tears into ‘ungrateful’ Harry Potter cast ‘twerps’

Someone else kidded around about the possibly uneven flooring Piers was standing on.

“Loving the decking. Looks like I laid it. Blindfolded,” they wrote.

And yet another person ribbed Piers: “I just feel like you’re in the way of an incredible view.”