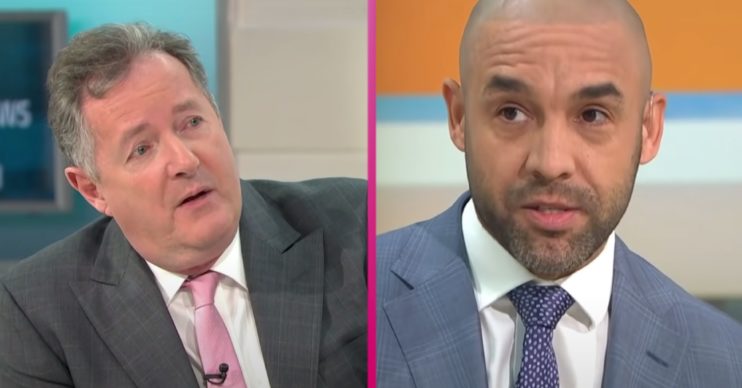 Piers Morgan has taken aim at Alex Beresford, his former GMB co-star, while opening up about quitting the ITV daytime show.

Piers, 55, has accused Good Morning Britain weather expert Alex of ‘trying to make name for himself’ during their onscreen row earlier this month.

The ex editor also claimed his feelings had been hurt by the clash, as he’d previously offered Alex career advice.

Referring to Alex as “GMB‘s occasional stand-in weatherman”, Piers wrote he told the show’s production team to summon him.

Piers claimed he wanted to debate Alex after he messaged Piers suggesting he needed to understand Meghan Markle’s racism claims from the perspective of mixed-race people.

Piers, admitting to being “tired and agitated”, wrote in today’s Mail column that Alex also seemed “uptight” during the broadcast.

He also described Alex’s position as a “very personal attack”.

Piers went on to claim the confrontation left him het up – and he was upset by Alex ‘turning on him’.

Piers wrote: “As [Alex] delivered his censorious lecture, implying my only motivation for disbelieving Ms Markle’s outlandish interview claims was because she ‘ghosted’ me four years ago after we’d been friendly for 18 months – I genuinely couldn’t care less about that, but it was informative as to her character, especially when I saw her do the same thing to many other people, including her own father – I felt the steam rising inside me.

I wasn’t going to sit there and take it from one of my own team.

“I don’t mind outside guests trying to make a name for themselves by whacking me like this, but I wasn’t going to sit there and take it from one of my own team, especially someone who I’ve gone out of my way to help whenever he’s asked me for advice about his career.

How matters have been between Alex and Piers since

Piers hinted that the former colleagues have not been in touch since the dramatic TV moment.

But it seems he has been in contact with Susanna Reid and others.

Piers wrote he had received “nice” messages from the rest of the presenting crew, but mentioned Alex by name as not having dropped him a line.

Alex returned to GMB last Friday (March 26) and revealed he was happy to be back.