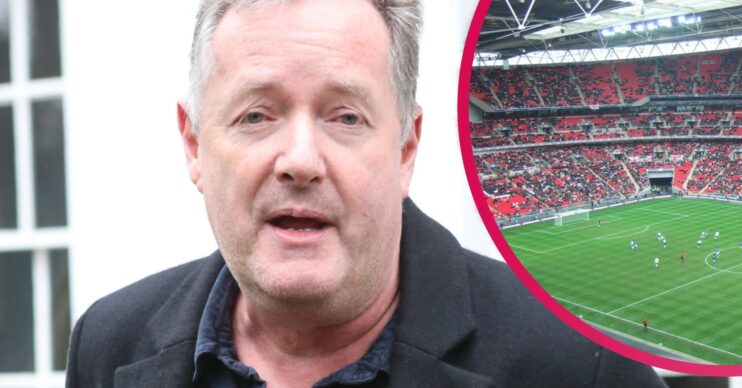 Piers Morgan has revealed that he caught Covid while watching England play in the Euro 2020 final at Wembley Stadium two weeks ago.

The former Good Morning Britain presenter, 56, said he contracted the deadly virus at the football showcase, even though he’s been double-jabbed with the vaccine.

And he reckons he’s never felt so sick in his entire life.

What did Piers Morgan say about catching Covid?

Officials had announced that the match between England and Italy a fortnight ago would be Covid-safe.

However, chaos ensued at Wembley as hundreds of people managed to gain entry without a ticket.

In his column for the Mail on Sunday magazine, Piers wrote: “My confidence that the event would be ‘Covid-safe’ had disintegrated. It was turning into an unregulated free-for-all.”

And the presenter’s worst fears came true when, two days after the final, he started to feel poorly.

He revealed that he took a lateral flow test, which showed a positive result. So he followed it up with a PCR test.

Four days after the final – which England lost on penalties – the results of that test also came back positive.

Piers explained that he has a fever, chills and a violent cough.

The presenter, who quit Good Morning Britain in March, wrote: “As I’m sure everyone who gets it feels, it’s a strange, disquieting moment to know I have this killer virus inside me.

“This is definitely the roughest I’ve felt from any illness in my adult life. BUT, as I slowly come out the other side, coughing and spluttering, I’m still here – unlike so many millions around the world who’ve lost their lives to Covid in this pandemic.”

Piers went on to thank the scientists at Oxford University who created the AstraZeneca vaccine.

He’s been critical of the UK government’s response to the pandemic, and last week launched an attack on the Prime Minister on Twitter.

“Boris Johnson tells us to abide by the rules he intended to circumvent until everyone wants nuts,” he wrote.

“What a shambles – but what else to expect from a guy who can’t be bothered to even brush his hair when he addresses the British people? You’re Prime Minister, not Worzel Gummidge.”