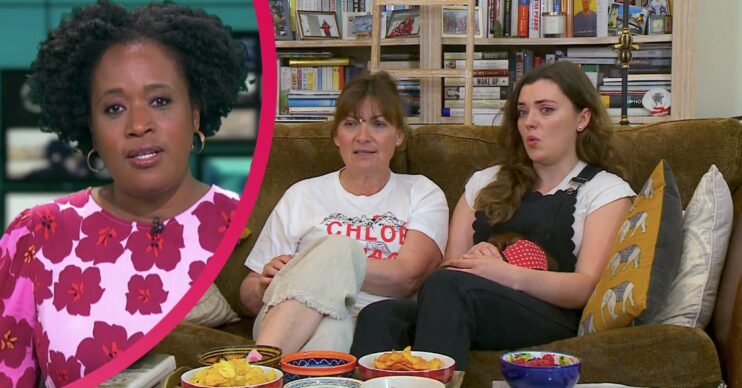 Fans of the Channel 4 show have 'had enough'

Celebrity Gogglebox 2021 viewers have slammed the show for repeatedly including COVID-19 news reports in the programme.

Fans hit out after the stars were seen reacting to another ITV News segment during the latest episode.

Filmed prior to ‘Freedom Day’, Prof Whitty was shown saying hospital admissions could reach “scary” levels as the UK is unlocked.

But Celebrity Gogglebox viewers appeared more bothered that the report made the final cut.

A third moaned: “Come on Gogglebox we are living Covid misery everyday. Gogglebox is supposed to be a bit of light relief!”

How did the Celebrity Gogglebox 2021 stars react?

There was a mixed reaction from the celebs over the ITV News report.

However, broadcaster Gyles Brandreth told his pal Maureen Lipman: “The difference now is, although the numbers are going right up again, the deaths and hospitalisations are many fewer because of the vaccine.”

Denise Van Outen’s boyfriend Eddie remarked: “We know it’s not over but we’ve got to live with it. This is the whole point.

“The whole point with everyone getting double jabs is so we can go forward and live with it.”

But their comments only divided other viewers.

One wrote: “I guess none of them noticed the cases rising or anything. Too busy enjoying themselves. Then you[‘ve got] Denise Van Outen’s man, ‘Oh we have to live with it’. NO not the way it is right now.”

However, another said: “Enjoying Gogglebox until they start talking [bleep] about Covid. Are they all wanting to stay locked up for the rest of their lives ffs??”

Celebrity Gogglebox kicked off again in June and featured a rolling cast of famous faces.

Unfortunately for fans, Friday night’s instalment was the last in the series.

It is believed series 18 of the regular Gogglebox will return to screens this September.

Did you enjoy this series of Celebrity Gogglebox? Leave us a comment on our Facebook page @EntertainmentDailyFix and let us know!