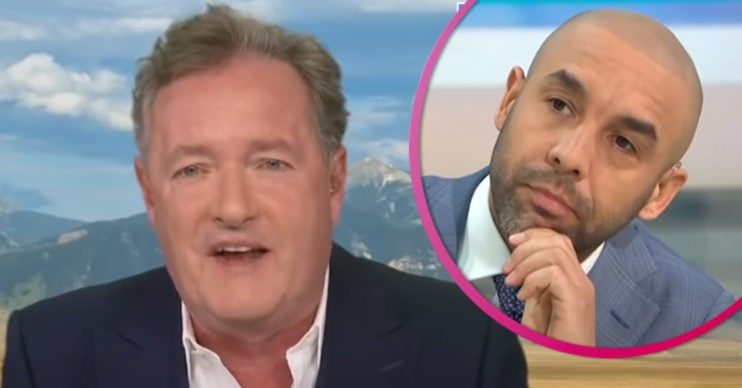 Piers Morgan accused Alex Beresford of a “premeditated” attack on him in his Fox News interview.

On Monday, the presenter spoke to Fox host Tucker Carlson in his first TV chat since his departure from Good Morning Britain.

Last month, Piers quit the show after a backlash over his comments about Prince Harry and Meghan Markle‘s Oprah interview.

During the programme, weatherman Alex accused Piers of “trashing” Meghan which left the presenter walking off set.

What did Piers Morgan say in his Fox interview?

The star spoke about the moment he clashed with Alex, who lashed out at Piers for saying he didn’t believe Meghan in the interview.

Piers told Tucker: “He’s not a journalist, but he’s somebody I’ve helped with his career a number of times when he’s asked me to.

“He sent me a private message in which he expressed some concern about what he felt I wasn’t really understanding about where Meghan Markle was coming from as a biracial woman.”

Piers continued: “The moment he came on air, he came with a pretty premeditated attack on me on a pretty personal level and frankly I just wasn’t going to have it.

He came with a pretty premeditated attack on me.

He said in a statement: “I hoped we could reach a place of understanding.

“It’s sad that we weren’t able to get there, but challenging his opinion was not an outrage. On this occasion, we have to agree to disagree.

Meanwhile, Piers spoke about Alex in his Mail on Sunday article in which he opened up about his exit.

He said: “I don’t mind outside guests trying to make a name for themselves by whacking me like this.

“But I wasn’t going to sit there and take it from one of my own team, especially someone who I’ve gone out of my way to help whenever he’s asked me for advice about his career.”

What has Alex said?

Writing for The Telegraph, he said: “I have been forced to step away from Twitter and Facebook myself, because it was getting too much.”