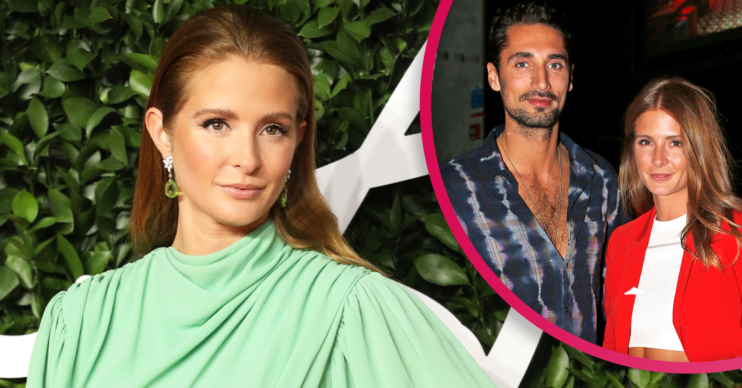 Millie Mackintosh is devastated after her baby daughter Sienna was diagnosed with a hip condition.

Former Made In Chelsea star Millie told fans that her tot will now have to wear a harness for up to three months.

Millie says she is “saddened” and “emotional”, as the brace makes it tricky to cuddle and breastfeed her daughter.

But she and husband Hugo Taylor are hopeful it will avoid the need for surgery.

Millie told fans about her Sienna’s medical condition while sharing a photograph of her wearing the harness.

What’s wrong with the daughter of Millie Mackintosh?

She said on Instagram: “It’s been an emotional few days over here…

“Sienna had a routine hip scan at 6 weeks because she was breech from 28 weeks onwards, it showed one hip socket was under developed but I was reassured it was likely to sort itself out by 12 weeks, but they booked her in for another scan just to make sure.

“Despite being naturally worried initially, I put it to the back of my mind and got on with things.

It’s been an emotional few days over here…

“But when we went for our second scan, I was shocked and saddened to learn she has in fact got developmental hip dysplasia and the treatment is to wear a special harness all the time for 6-12 weeks.”

Read more: Stacey Solomon quits social media over fears fans are ‘sick of the sight’ of her

Millie went on to explain that there is a 90% chance of the harness correcting her hip.

The former reality star said this has made her and Hugo “grateful” and “positive” about the future.

But she added: “The hardest part is that I can’t hold her properly to cuddle her and finding a comfortable breast feeding position is really difficult while we adapt to this change in our reality, a reality that we’ve worked so hard on!

“It feels like we are back at the newborn stage, her routine has gone out the window and we are having to learn how to care for her all over again.”

Millie is now calling upon her 1.4 million followers for advice.

She added: “Although she is being very brave, she is confused and frustrated that she can’t move her legs and it’s really challenging emotionally as parents to see her so distressed.”

Responding, one fan reassured her: “Aww bless her. My eldest was born breech and her left hip socket hadn’t formed correctly.

“She had to wear an Aberdeen splint for the first 8 weeks of her life and have consultations up until she turned 16.

“She’s now coming up 20 and a dance student at Kingston Uni. Your little girl will be okay 💕.”

Another said: “How worrying for you, Mama. I’m sorry to hear that.

“I was born with both hips out of place and wore a harness for 6 months (back in the 90s). I never had any issues with movement whatsoever. Hope this puts your mind at ease.”

Millie and Hugo, who also starred in Made In Chelsea, welcomed Sienna into the world at the end of April.

In a pregnancy interview with Hello!, Millie had previously said: “Hearing her heartbeat for the first time with Hugo by my side was one of the most amazing moments of my life so far.

“I can’t wait to feel that bond and for her to sleep on my chest and breathe in that baby smell.”