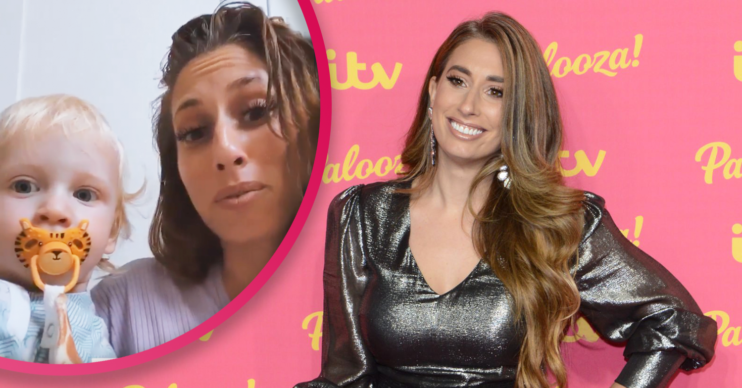 Stacey Solomon has put herself on a social media ban after fearing fans are “sick” of seeing her posts.

The Loose Women star has decided to quit Instagram for 24 hours so she can spend some quality time with her little family.

Stacey’s decision to “put her phone in a drawer” comes after a very busy day over on the ‘gram.

On Friday, the mum of three shared sweet clips of her kids’ breakfasts and their garden antics with her boyfriend Joe Swash.

Stacey also filmed some footage of their trip to a local swimming pool and treated fans to a glimpse of some ornaments she had bought.

But Stacey, 30, has been left wondering if it was all a bit much!

Taking to Instagram on Saturday morning, the star said: “It’s phone in a drawer day today.

“And I feel it’s for the best. I just watched my stories back and I put so many on yesterday you’re probably sick of the sight of me!”

This is not the first time Stacey – who has a whopping 3.6 million followers – has imposed a temporary social media ban on herself.

Stacey signed off by wishing her fans a lovely day.

The star occasionally switches off her phone on the weekend, so she is not distracted from her gorgeous brood.

It also means she can have a break from the handful of critics, who she calls “Susans”, who sometimes take issue with her posts.

Only this week, Stacey was slammed by followers for giving her one-year-old son Rex blackberrries.

The star was enjoying a walk with the tot and his big brother Zachary, 12, when they spotted the fruit growing.

She then filmed herself giving Rex a handful after picking them from the bush.

But Stacey later had to defend her decision after receiving some unnecessary criticism.

She said: “Nope Susan I didn’t wash the berries…

“I forgot to bring my sink with us but it stopped him from eating the mud so I went with it.”

Later, Stacey added: “So many of you messaging asking if I’m worried about bugs that can live in berries… I’m not.

“I’m pretty sure they’re safe to eat… extra protein too.”