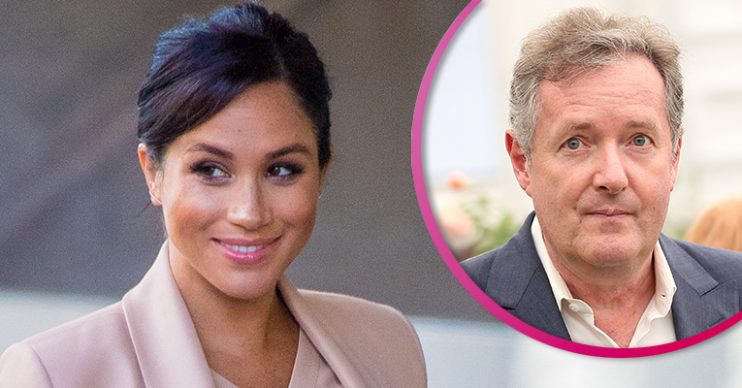 Tell us how you really feel, Piers!

The Duchess of Sussex’s Vogue cover received mixed reviews this week, with some hailing it a success and others slamming the royal for not including Her Majesty The Queen in the Forces For Change edition.

But one person who is most definitely not sitting on the fence when it comes to his opinion of the September issue is Good Morning Britain host Piers Morgan.

While some may say it’s sour grapes after his one-time friend Meghan apparently ghosted him upon meeting Prince Harry, Piers insists the “stunt” was “shamelessly hypocritical”.

He even called the Duchess of Sussex’s decision not to appear on the cover in case she appeared too “boastful” and “hilarious”.

Instead, Meghan – who is mum to baby Archie – featured a number of female “trailblazers” such as Jameela Jamil and Jane Fonda on the cover.

Writing for the Daily Mail, Piers also commented on the fact that Meghan edited the magazine during her maternity leave – a time when she was too busy looking after her baby to greet American President Trump.

Read more: Experts predict Maura and Curtis will be ‘first to split’

He said: “News that Meghan has spent the past seven months guest-editing the September issue of Vogue is no surprise to me. As a B-list actress, she’s probably craved all her adult life to be a Vogue star.”

He also said that being a royal means that you have to stay out of politics and added: “Yet here is Meghan being about as political as any royal has ever been.”

He also said that he reached for the sick bucket when he read on the Sussex Royal Instagram account that Meghan had decided to include a mirror among the women on the cover so that “when you hold the issue in your hands, you see yourself as part of this collective”.

Piers also quipped that Meghan is not the “country’s most influential beacon of change”, as Vogue editor-in-chief Edward Enniful announced when he revealed that the duchess would be guest-editing the issue.

“The fact she allowed Enniful to state this as fact in a statement suggests the duchess’s ego is running dangerously out of control,” Piers added.

He also said her list of game changers wasn’t at all inclusive as she neglected to include a single man on the cover.

Fans have defended Meghan on Twitter, with one writing: “The only hypocrisy is from you. You complain about her constantly looking for attention etc whilst you do EXACTLY the same.”

Another said: “Why does it bother you Piers? What’s up with you focusing on things like that when there are bigger issues out there?”

A third tweeted: “We should be proud of the good she does and her message impacts all woman, yet here you write yet another column which belittles her intentions. When will you ever say anything positive about the Duchess of Sussex.”

What do you think of Piers’ comments and Meghan’s September issue? Head to our Facebook page @EntertainmentDailyFix and let us know!