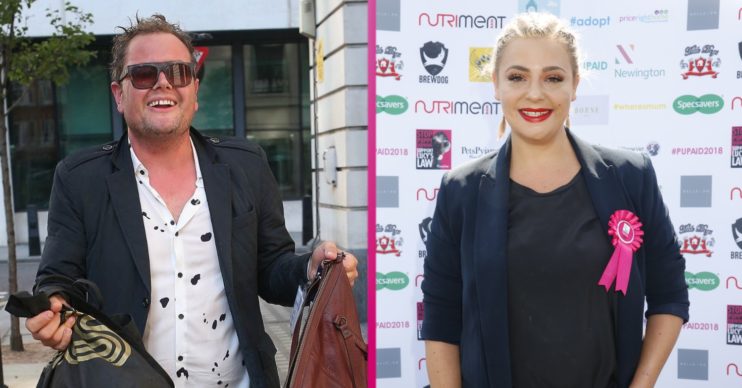 She also appears to be making progress with ex Ant McPartlin

The professional makeup artist appeared delighted as she was spotted hanging out with the comedian earlier today (October 7).

The two were socially-distanced while Lisa snapped away for a selfie on the beach.

In the snap, Alan is seen playfully prodding his pal from afar with a large stick.

The Strictly Come Dancing makeup artist, 43, wrapped up for the coastal outing in a red fur-trimmed jacket and a floral mask.

Your eyes are showing just how happy you are.

Captioning the shot, Lisa wrote: “Always hilarious when hanging out with this one!!! @chattyman Fun and frolics on the beach.. #2meters #hesgothisstickout #dontmess.”

But it was the glimmer in her eyes that really got fans talking.

What did Lisa Armstrong fans say?

Taking to the comments section, one wrote: “So lovely to see you smiling, well, can see in your eyes how happy you are.”

Another said: “So lovely to see you smiling again Lisa.”

A fourth added: “Your eyes are showing just how happy you are @lisaarmstrongmakeup so pleased for you.”

Lisa and Alan have been friends for years.

Back in 2018, the makeup artist declared her love for the popular TV presenter as she joined him at Crufts.

Sharing a snap of the three together, Lisa wrote: “Love you both so much!!! #Crufts2018 #bevandjoyce.”

The star also appears to be making progress with ex Ant McPartlin.

Earlier this week, Lisa proved she has ended their feud after liking a tweet referencing the Britain’s Got Talent host.

The tweet, which was posted to Ant and Dec’s joint account, showed the TV duo in a hilarious sketch video.

Lisa and Ant, who announced their separation in 2018, finalised their divorce in April following a lengthy legal battle.