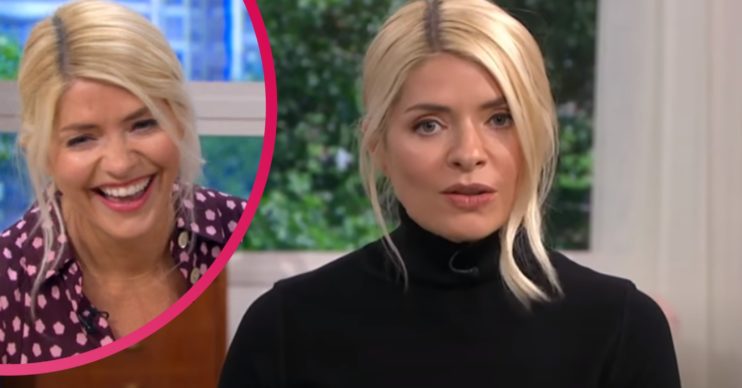 The This Morning star may think twice before doing it again

Holly Willoughby probably didn’t expect the reaction she received on Tuesday (October 6) when she shared an innocent picture of her feet on social media.

The This Morning star was gearing up to prepare for a day of filming something “special” and she decided to tease fans with a clue.

Taking to her Instagram, Holly shared a boomerang of herself knocking her heals together just like Dorothy in the classic Wizard of Oz movie.

She captioned the clip: “There’s Manolo place like home… filming something exciting today…”

While some fans complimented her gorgeous shoes, a handful of others seemed more taken by what was wearing them…

Read more: Win a £250 Amazon voucher by taking part in our reader survey

A second fan asked: “Show the bottom of your feet?”

While another added: “Wow your feet are so hot!” alongside a flame emoji.

What was Holly Willoughby wearing on This Morning?

Holly Willoughby took style inspiration from her mum on Tuesday’s This Morning (October 6), wearing a blue blazer dress that resembled the uniform a 1960s air hostess.

The TV presenter’s mum Linda was once airline cabin crew.

And, Holly said, she felt like she was “channeling her vibe” as she hosted the show.

Taking to Instagram ahead of the 10am start, Holly revealed what she was wearing.

What did Holly Willoughby say about her air hostess-style outfit?

The star wowed in a gorgeous £280 Claudie Pierlot mini dress.

She teamed it with a £40 All Saints bodysuit and white Kurt Geiger boots, £189.

During a rather disastrous round of Spin To Win, Holly’s co-host Phillip Schofield poked fun at Holly as he invited her to show off her outfit in all its glory.

He quipped: “And as we bring the wheel down, now is the chance to point out you in all your full glory. Would you like to point out the emergency exits?”